by dempsey reyes
in COVID-19
Reading Time: 2 mins read
A A
464
SHARES
1.8k
VIEWS
Share on FacebookShare on Twitter 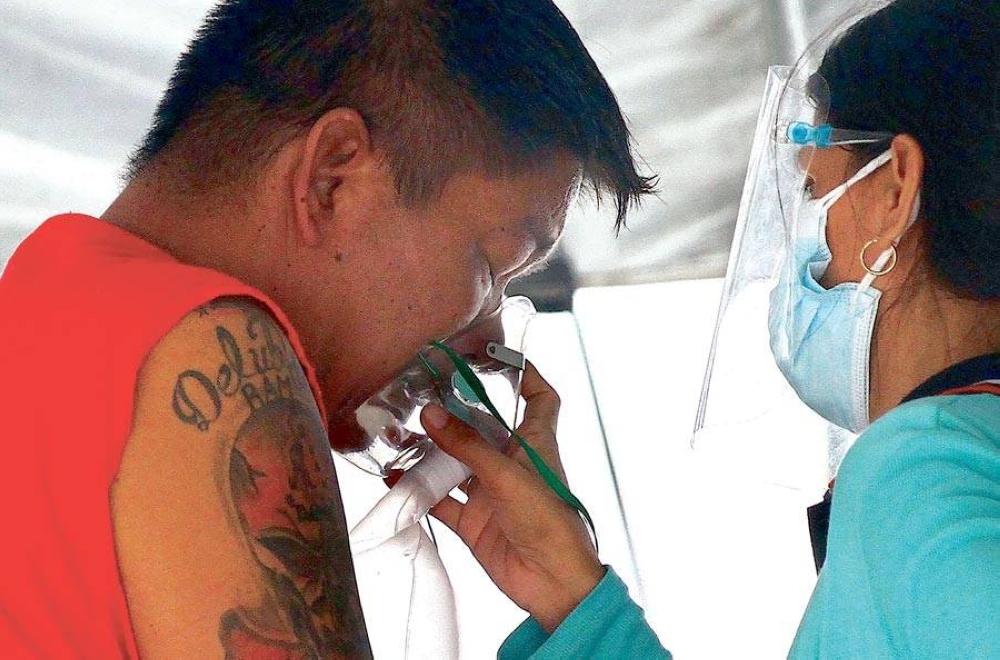 HANG ON A relative helps a patient breathe while waiting to be attended to outside the Sta. Ana Hospital in Manila, on Monday, Aug. 16, 2021. PHOTO BY MIKE ALQUINTO

THE chief of the Philippine National Police (PNP) on Monday warned against the hoarding of oxygen tanks and other medical supplies, especially at a time when the country is trying to contain the surge in Covid-19 cases attributed to the Delta variant.

“In the middle of the rising cases of Covid-19 in the country, the PNP is reminding the public to avoid hoarding oxygen tanks and other medical equipment and supplies,” Gen. Guillermo Eleazar said in a statement.

Eleazar noted Health Secretary Francisco Duque 3rd’s statement that there is no shortage of medical-grade oxygen supplies, and dissuaded the public from stashing oxygen tanks at home “so that the supply could circulate and avert a shortage.”

He called on the public to report hoarders of medical equipment.

He said the PNP will coordinate closely with the Department of Trade and Industry in preventing the hoarding of oxygen tanks.

“Oxygen tanks are very important, as well as the other medical equipment and supplies, especially now that we are in the middle of a pandemic,” Eleazar said.

The detection of the country’s first case of the Lambda variant prompted Eleazar to renew his call to the public to strictly observe the minimum health precautions against Covid-19.

Eleazar said there are “still a number of people who continuously ignore the minimum public health safety and other quarantine protocols.”

“I am saddened that with the rising number of Covid-19 cases and despite our repeated reminders and warnings, the number of [quarantine] violators are rising, especially in Metro Manila and in its neighboring provinces,” he said.

In Metro Manila alone, 82,209 violators have been rounded up by the police during a two-week lockdown.

The PNP said 54,723 violators were not complying with minimum health standards while 22,759 were caught violating the curfew.

It said 4,727 violators were individuals not authorized to leave their residences. The data did not specify if the violators were arrested or were merely given warnings.

Despite the rising number of violators, Eleazar said the police will continue enforcing quarantine protocols “since this is an effective way to control the spread of whatever Covid-19 variants.”