by emmanuel egobiambu
in Africa News
Reading Time: 3 mins read
A A
464
SHARES
1.8k
VIEWS
Share on FacebookShare on Twitter

Burkina Faso’s General Gilbert Diendere (R) and other accused attend the opening of the trial of the alleged perpetrators of the assassination of Thomas Sankara in Ouagadougou, on October 11, 2021. OLYMPIA DE MAISMONT / AFPA military court in Ouagadougou on Monday began the long-awaited trial of 14 men, including the former president, accused in the assassination of Burkina Faso’s left-wing leader Thomas Sankara 34 years ago.

The slaying of Sankara, a pan-Africanist icon, has for years cast a shadow over the poor Sahel state, fuelling its reputation for turbulence and bloodshed.

Sankara and 12 others were riddled with bullets by a hit squad on October 15, 1987 during a putsch that brought his friend and comrade-in-arms Blaise Compaore to power.

Compaore, the chief accused, announced through his lawyers last week that he would boycott the trial.

He ruled the country for 27 years before being deposed by a popular uprising in 2014 and fleeing to neighbouring Ivory Coast, which granted him citizenship.

He and his former right-hand man, General Gilbert Diendere, who once headed the elite Presidential Security Regiment, face charges of complicity in murder, harming state security and complicity in the concealment of corpses.

Diendere, 61, is already serving a 20-year sentence for masterminding a plot in 2015 against the transitional government that followed Compaore’s ouster.

He appeared in court dressed in military uniform and looked relaxed.

Another prominent figure among the accused is Hyacinthe Kafando, a former chief warrant officer in Compaore’s presidential guard, who is accused of leading the gunmen. He is on the run.

Compaore has always rejected suspicions that he orchestrated the killing.

His lawyers last week announced he would not be attending a “political trial” that they said was flawed by irregularities, and insisted he enjoyed immunity as a former head of state.

After several hours, proceedings were adjourned until October 25 after defence lawyers said they were confronted with 20,000 documents and had had little time to prepare their case. They requested a one-month postponement but were granted a stay of two weeks by judge Urbain Meda.

Left-Wing HeroIn this file photo taken on August 31, 1986 Captain Thomas Sankara, President of Burkina Faso, salutes upon his arrival in Harare for the 8th Summit of Non-aligned countries. ALEXANDER JOE / AFPA young army captain and Marxist-Leninist, Sankara came to power in a coup in 1983 aged just 33.

He tossed out the country’s name of Upper Volta, a legacy of the French colonial era, and renamed it Burkina Faso, which means “the land of honest men”.

He pushed ahead with a socialist agenda of nationalisations and banned female genital mutilation, polygamy and forced marriages.

Like Ghana’s former leader Jerry Rawlings, he became an idol in left-wing circles in Africa, lauded for his radical policies and defiance of the big powers.

Burkina Faso has long been burdened by silence over the assassination and many are angry that the killers have gone unpunished.

During Compaore’s long rule, the question of Sankara’s bloody death was taboo.

After his ouster, the interim government in 2015 launched an investigation into the episode, and the following year issued an international arrest warrant for him.

“This is a day of truth for me, my family and all Burkinabe,” she said, referring to the name of Burkina citizens.

The family’s lawyer, Stanislas Benewende Sankara — who shares the same name but is not a relative — said Compaore’s absence was a “slap in the face” to Burkina Faso’s justice system.

The trial “may not be the end of the tunnel, but we are reaching a very important phase, judicially speaking,” he said.

An association called Justice For Thomas Sankara, Justice for Africa said it feared the trial would not shed light on suspected international involvement in the turbulence of the 1980s.

Sankara’s fiery rhetoric against capitalism and corruption won him many young admirers in Africa at the time, but it also angered leaders in the United States, France, Ivory Coast and Togo.

One of the world’s most impoverished countries, Burkina Faso has also been battling a jihadist insurgency since 2015 that has claimed more than 1,400 lives and forced 1.3 million people from their homes. 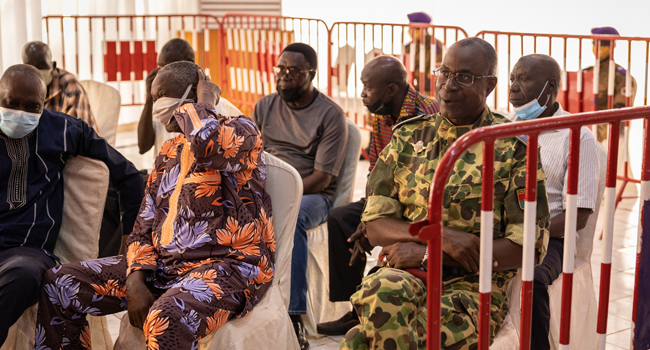 Did Osinbajo miss a point on the global climate emergency?, By Uche Igwe