by nebianet usaini
in Africa News
Reading Time: 2 mins read
A A
465
SHARES
1.8k
VIEWS
Share on FacebookShare on Twitter

Tanzania Chadema party chairman Freeman Mbowe flashes his fingers as he arrives at the court.Tanzanian police arrested several members of the country’s main opposition Chadema party on Saturday, the latest crackdown on a group pushing for constitutional reform in the East African nation.

The action follows the detention of Chadema leader Freeman Mbowe on terrorism charges that his party have branded a bid by President Samia Suluhu Hassan’s government to muzzle the opposition.

Police detained nine party members and raided its offices in the northern lakeside town of Musoma to block a planned symposium by the youth wing on constitutional change, Chadema said.

“We strongly condemn this blatant violation of the constitution and rule of law, sowing the seeds of hatred, discrimination and discord within communities,” it said in a statement, protesting at the “suppression of democratic rights” by police and other security forces.

Mbowe has been behind bars since July 21 when he was arrested along with a number of other senior Chadema officials hours before they were to hold a similar forum on calls for a new constitution.

The 59-year-old has been charged with terrorism financing and conspiracy in a case that the opposition says shows Hassan is continuing the oppressive rule of her late predecessor John Magufuli.

He is due to appear at the High Court again on Monday, although his trial has been held up by legal wrangling, with his defence team most recently challenging the legality of the charge sheet.

Referring to Saturday’s arrests, Longinus Tibishibwamu, police chief in the Mara region of which Musoma is the capital, said the force cannot allow such events to take place.

“The president has instructed that people should now focus on economic development… So such conferences will have to wait,” Tibishibwamu was quoted as saying by local media. 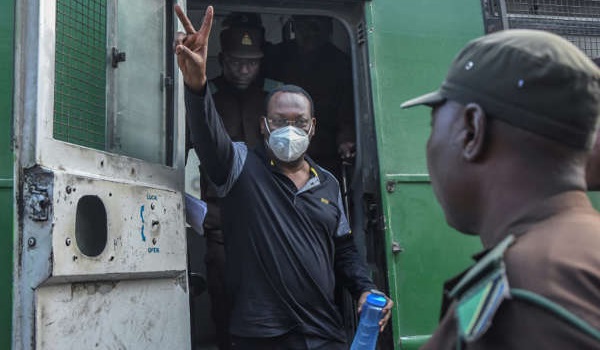