by eunice stoltz
in Africa News
Reading Time: 4 mins read
A A
464
SHARES
1.8k
VIEWS
Share on FacebookShare on Twitter

Mama Dina Christiaan, known as Queen Dina for her ability to speak Nama, sits outside her shack that’s surrounded by budding flowers twirling in the old fence.

Flowers are an important symbol in this part of the country. This year’s heavy rains during winter in large parts of the Western Cape and Northern Cape fed the unique flora that now covers the landscape in the West Coast and Namakwa districts.

“When you stand in the wind and call the rain, the rain comes,” says Paul Swartbooi, the Khoikhoi gaob (chief) of the Swartbooi clan.

He talks about the value of the flower season. Besides the financial benefits, it holds the promise of new life. He says that when a flower breaks through the arid earth’s crust it reminds us that life will get better again. “Even while Namaland blooms and we find ourselves in grief, we know the flowers will come.”

The rain accompanied by the abundance of flowers reminds the Nama of their ancestors who would go to the veld two or three weeks after the winter rains to dance, honouring the soil.

Life blooms: Flowers cover the landscape in the Hantam region of the Northern Cape. (Photo by David Harrison)

It’s a typical day in the town. Neighbours walking along the streets and children badger each other about who lost the spinning top that is now in the deep end of the water hole. Mama Dina doesn’t intervene and instead waves us to seats outside her home.

In the yard flowers are budding and her husband is working on one of the two cars.

She recalls her years as a child in the Karas region of southern Namibia during spring. “We go to the veld in search of food such as plants, wild cucumbers, berries and wild potatoes, called llnāba in Nama.”

While Mama Dina and Swartbooi talk about the fields of colourful flowers, an underlying concern becomes evident: the survival of the Nama language and culture.

As Mama Dina talks about her life, she smiles and her eyes light up. Her community was tight-knit and they would speak Nama. Only when she moved to the South African side of the region did she realise that so few people spoke the language.

Nama stems from the larger group of Khoikhoi who lived in large parts of South Africa, Namibia and Botswana for thousands of years. The Nama speak the language Khoekhoegowab, generally referred to as Nama. It is known for its complexity and “click” sounds of which there are four types. The Nama language “stands hanging” in South Africa as younger people have not only started to mix Afrikaans and Nama but have labelled the language a “skindertaal” — a gossip language. Mama Dina says the government’s efforts to preserve the language are non-existent.

For Swartbooi, Nama became a “hidden language” when recent awareness of the language proved that a few hundred older Nama in the Richtersveld and next to the Orange River still speak the purest form of Nama.

Untold stories: Paulus Swartbooi, who lives in Springbok, is the gaob of his clan and an activist for the Khoikhoi. Photo: David Harrsion

“But should the language first stand on the edge of extinction before we start to promote it?” asks Swartbooi, referring to Ouma Katrina Esau in Upington, who is the very last fluent speaker of the San language, N|uu.

In May this year, Ouma Katrina launched the first N|uu children’s book !Qhoi n|a Tjhoi (Tortoise and Ostrich) with the assistance of the government and Puku Books.

It is rare to hear pure Nama on the streets, says Mama Dina, who speaks the language to only two of the older people who live in Steinkopf.

She says that her children do not speak pure Nama but quickly adds that her grandson, who is in primary school, is learning — and he can say the children’s prayer “Liewe Jesus ek is klein” in Nama.

Mama Dina is driven to protect the language before it becomes obsolete.

When she and her husband, who is from the royal Christiaan family of the Bondelswarts in Namibia, moved to South Africa in 2007 she discovered her gift for teaching Nama.

Mama Dina teaches Nama language lessons through the local radio station, Radio NFM 98.1, on Mondays at 2.30pm. And every day she translates the news into Nama.

Since the start of the Covid-19 pandemic, her white Citi Golf became her recording studio — despite her grandson and his friends playing outside in the winter sun. To cut out the noise, she “just closes the windows”.

In addition to her radio classes, she hosts Whatsapp groups and teaches anyone who wants to learn the language. She does this without making any profit

She says “it doesn’t feel right to ask for money,” so people can contribute as they deem fit or they can send her cellphone data.

Dina Christiaans inside her home in Steinkopf in the Northern Cape, where she works as a translator of the Nama language for local radio station NamaFm. (Photo by David Harrsion)

“I’m proud to pass on my language. When it comes to my language I can stay busy the whole day, I don’t get tired,” says Mama Dina who is writing a children’s book in Nama, English and Afrikaans.

Swartbooi believes there are many untold stories in Africa, “particularly in this part of the world … it is sometimes not what people want to hear, while others will appreciate it”.

Like the endless plains that stretch through Namakwa and coated in wildflowers announcing a new season, so Mama Dina tirelessly tries to ensure the Nama language too will survive. 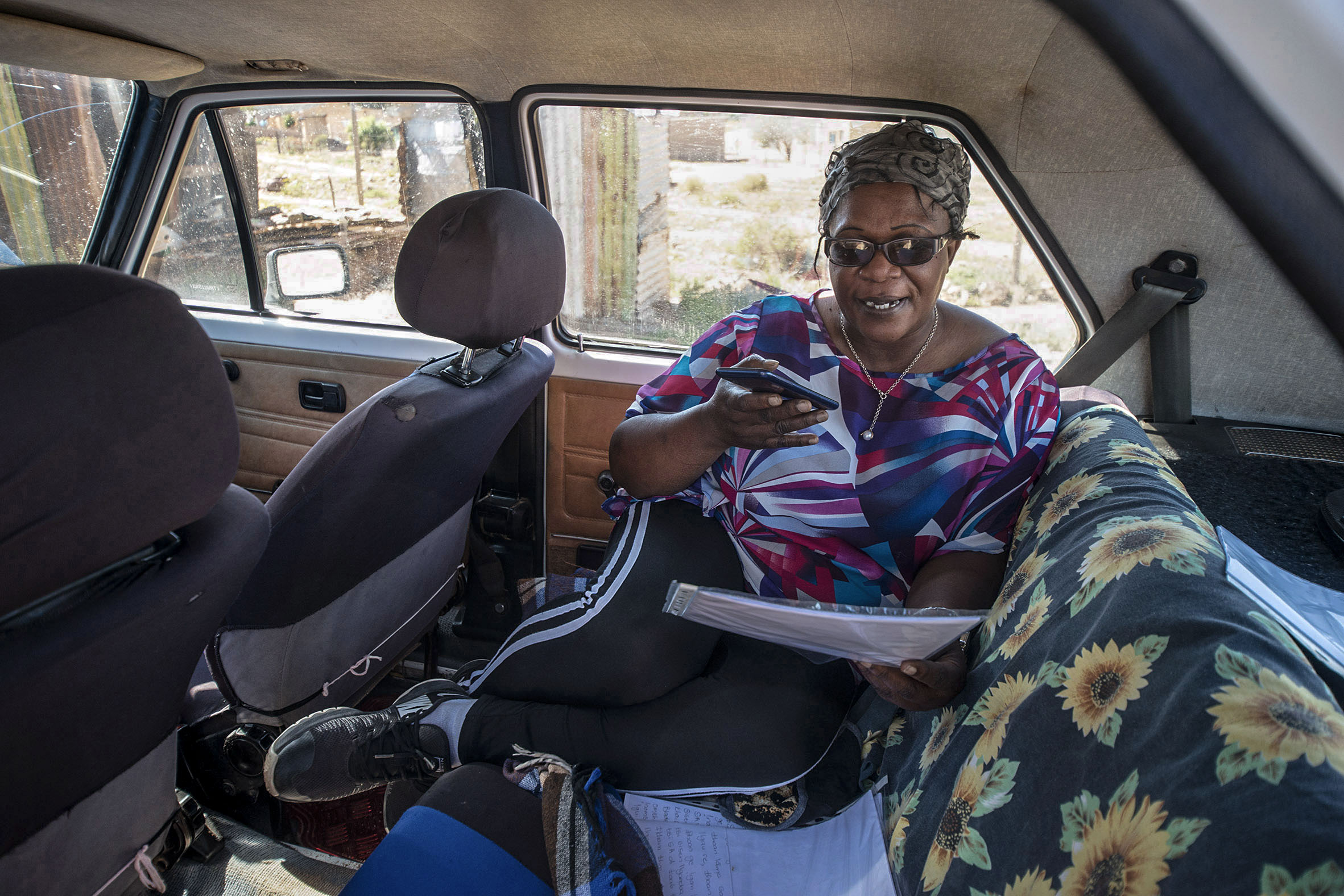