DM168 REFLECTION: South Africans must rise up to stop the pure evil that leads to the murder of good civil servants

by anthony fleishman
in Africa News
Reading Time: 4 mins read
A A
465
SHARES
1.8k
VIEWS
Share on FacebookShare on Twitter

A candlelight vigil for corruption whistle-blower Babita Deokaran at the office of the premier on 26 August 2021 in Johannesburg, South Africa. (Photo: Gallo Images / Fani Mahuntsi)

If there is no political will at the top to stop the evil, we the people who love our country need to stop the politicians who have allowed the evil to hold sway, be it at the ballot box or in protest marches, petitions or lobby groups.

The brutal murder of Gauteng Department of Health acting Chief Financial Officer Babita Deokaran outside her Winchester Hills home in Johannesburg is a clear sign of the pure evil that possesses the politically connected criminals who have invaded and taken hold of government from the smallest municipality to the heights of national government.

Deokaran was killed because she was a good public servant who did the right thing. As an acting CFO, she had insight into the skulduggery of state officials, politicians, and their friends and family in private business who jimmied the national State of Disaster regulations to seize public funds. They saw a global pandemic as an opportunity to eat and eat and eat. Deokaran, who testified on this to the Special Investigating Unit, was an obstacle to the greed. So her assassination was ordered.

This week I bumped into two public servants in two different state departments, both black, both highly skilled, who saw Deokaran’s murder as the last straw. One is a young medical specialist who joined the civil service after qualifying 10 years ago. He is ready to emigrate; he cannot see SA improving under the ANC. He mentioned personal protective equipment (PPE) corruption and the National Health Insurance (NHI) as paths to even more corruption that could lead our fragile health system to total collapse.

The other public servant is an anti-apartheid activist who joined government during the Mandela era, believing she was part of a cohort of comrades who would change SA from an oppressive racist regime into a functional non-racial state that would uplift its citizens. She has, for many years, survived as a low-level manager in the security cluster. Deokaran’s murder spurred her to throw in the towel after being a bulwark against malfeasance. She feels there is not only very little political will to stop the rot, but also that mediocrity and loyalty are rewarded more than competence, skill and honest appraisal.

These are two highly skilled and committed public servants, very capable of being part of government’s service delivery and corruption shake-up, if there is the will to deliver services and clean up the cancer of criminal networks in the state. Instead they, like many other public servants who choose to serve, have had the hope sucked out of them. They are winded, wounded and afraid.

Imagine working for an organisation whose raison d’être is not to make money for shareholders and the CEO, but to provide quality basic services to citizens, the majority of whom rely on you as their lifeline, their only way out of poverty and starvation. You choose this work because you are committed to making a positive  difference to the lives of others. You arrive at work full of idealism, ready to roll up your sleeves and help to improve your country. But soon you notice that your enthusiasm is not shared. Many of your colleagues do the bare minimum, drag themselves to work for the paycheque and are downright rude to those they are meant to serve.

Then you notice these layabouts are suddenly energised when an announcement is made for PPE tenders, to protect healthcare workers from Covid-19. You are shocked to the core of your being. You report your suspicions to your superior. You are not just ignored; you are also sidelined. You find evidence that your colleagues and superiors ensure tenders go to family and friends, who set up instant PPE companies from shelf companies set up for parties and events. You are horrified. You have a paper trail of evidence. You phone a whistle-blowers’ hotline. You do your duty. You watch as nothing is done and colleagues speak about their spouses’ new sports cars and their children’s posh private schools. You see these colleagues being promoted to positions above you. You keep your head down. You see a colleague shout at a gogo who waited five hours in a queue. You feel sick and start sending your CV to NGOs, hoping to find one that shares your values of service to the people.

This scenario is one that many public servants who are competent, skilled and motivated by a service ethos endure. It is what makes good public servants leave government. The tardiness and negligence of public servants is nothing new. Then president Thabo Mbeki, in his 2005 State of the Nation Address, lashed out at public servants who “deny our people services”. But, as United Democratic Movement leader Bantu Holomisa responded, those who tend to get appointed are ANC members “who are often unqualified, incompetent or intent merely on their own enrichment”. Sixteen years later, that trend has metastasised into the evil that led to the murder of Deokaran.

If there is no political will at the top to stop the evil, we the people who love our country need to stop the politicians who have allowed the evil to hold sway, be it at the ballot box or in protest marches, petitions or lobby groups. After decades of being held to ransom by criminals, we deserve competent, compassionate, skilled, efficient public servants who are able to deliver “a better life for all”. Instead of more politically connected chancers getting a turn to eat, it’s time that more good public servants are given a turn to serve. DM168

Heather Robertson is the editor of DM168. 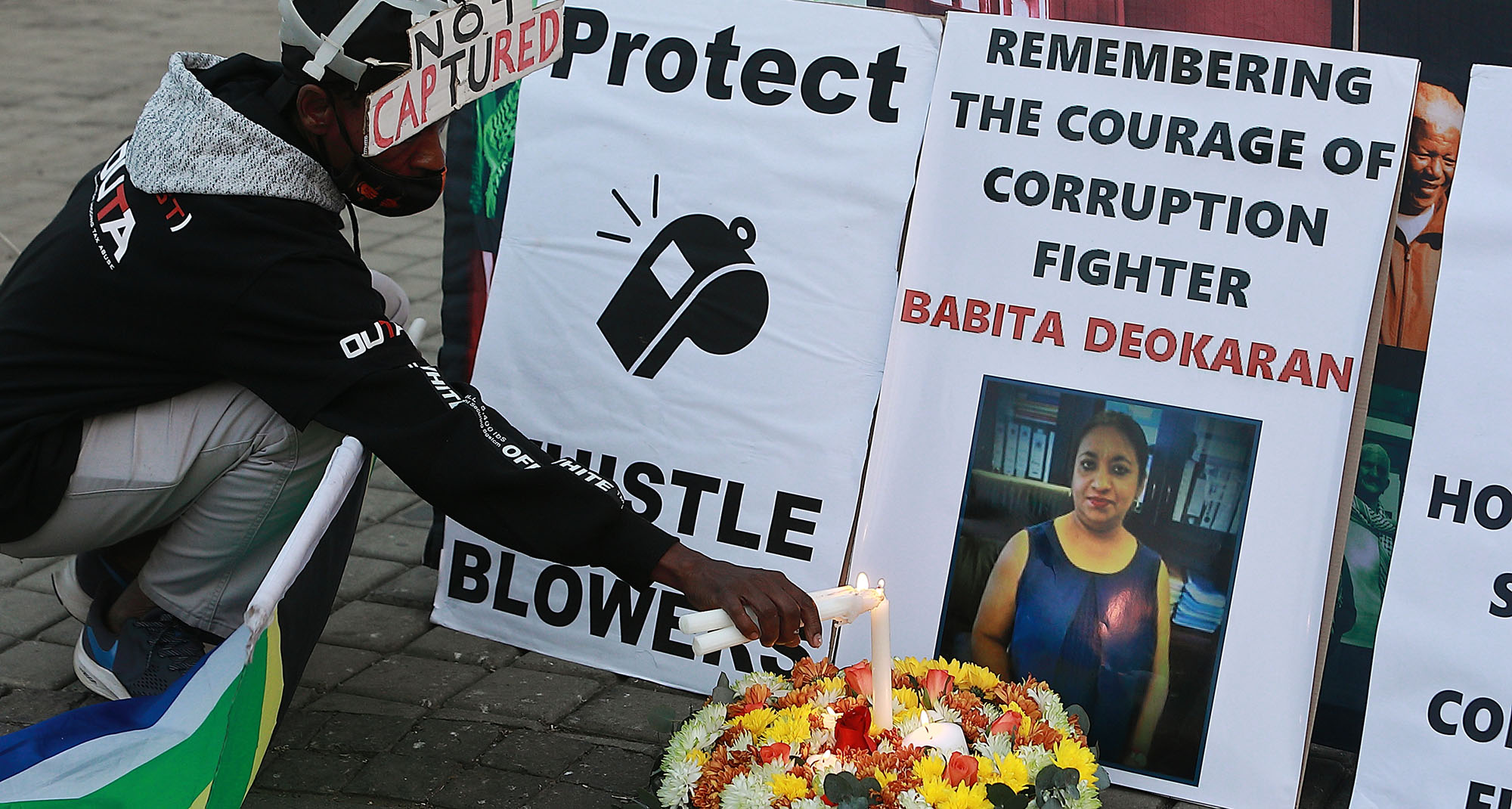