by clora wiers
in Africa News
Reading Time: 4 mins read
A A
464
SHARES
1.8k
VIEWS
Share on FacebookShare on Twitter

Since April 2020, 33 SAPS members have been murdered in the line of duty. This is alongside 840 SAPS members and support staff who have succumbed to Covid-19 since March 2020.

“We have some in our society who have absolutely no regard for the patriotic duty discharged by our police officers,” President Cyril Ramaphosa said in his keynote address at the SAPS commemoration day on 5 September at the Union Buildings in Tshwane.

“These are the people who attack our men and women in uniform and thus undermine the authority of the democratic state.” Ramaphosa emphasised they were also colleagues, sons, daughters, husbands, wives, brothers, sisters, loving fathers, caring mothers, neighbours and friends.

According to Lirandzu Themba, police ministry spokesperson, in August alone four SAPS members were murdered and one died in a motor vehicle accident.

Members of South African Police Service bow their heads in prayer. (Photo: Leila Dougan)
Police Minister Bheki Cele and Deputy Minister Cassel Mathale had at the weekend attended the memorials of officers Nkosinathi Ngcobo, Sharon Mogale and Pumlani Dastile, all of whom were murdered within a week of one another.

On 2 September, the police ministry announced that two unknown suspects shot sergeant Dastile, who was attached to the Eastern Cape Provincial Organised Crime unit, on 23 August while he was following up on information on a business robbery.

“The suspects shot officer Mogale in the head before making off with both of the officers’ service pistols. Petje was not injured during the attack,” the ministry’s statement read.

A day later, sergeant Ngcobo, from Richards Bay, was shot and killed while driving in his state vehicle around the Nyanda area in KwaZulu-Natal. The officer’s service pistol, wallet and cellphone were stolen.

On 2 September, it was also announced that SAPS member sergeant Andile Sirhunu was hijacked and killed in Eerste River.

More than 100 masked police and family members attended the commemoration day to salute the late SAPS members, including those who had succumbed to Covid-19, the 33 officers who were killed in the line of duty and a general who was murdered two years ago, but the investigation was concluded only this year.

“Our flag does not fly because the winds move it, but because of the last breath of each one of you who died protecting it,” reads the SAPS’ tributes to the late officers. Their names are engraved on the national SAPS memorial wall at the Union Buildings.

Other officers remembered were Sergeant Thamsanqa Mbedu, who died of multiple bullet wounds in March in the Iniwe area in KZN, and Sergeant ME Makgoba of Gauteng.

At Sunday’s commemoration, Cele said police would “leave no stone unturned” for the lives that were cut short by the criminals. The commemoration comes in the wake of heavy criticism — on 16 August 2021 — of police brutality during the ninth anniversary of the Marikana Massacre, where police shot 34 striking miners. They have also been scrutinised for their inadequate response to the July unrest in Gauteng and KZN.

Ramaphosa said he had appointed a task team to investigate the unprepared response from police and other law enforcement agencies.

“I am hopeful that the outcomes of this review and inquiry guide us and enable us to strengthen our resolve even more on how we should be more prepared to prevent such events and to gain the confidence of our people with regard to defending and protecting them against the actions of instigators of unrest and those with criminal intent,” said Ramaphosa.

Ramaphosa said that strengthening community-police relations and bringing strategic stakeholders on board were two priorities “to bolster the efforts of police to bring down the levels of serious and violent crime”.

Ramaphosa reiterated that occasions such as these were a stark reminder of the perils men and women in uniform faced as they carried out their duty to serve the country and protect its people. “We fully understand the anxiety that accompanies the knowledge that you could leave your home for work, never again to return,” the president said.

Anti-Gang Unit Lieutenant-Colonel Charl Kinnear was among the fallen police officers honoured. Among the family members who attended the emotional event were his widow, Nicolette Kinnear and her two children, Carlisle and Cashleigh.

Presently before court on five counts of conspiracy to murder Kinnear in November 2019 are Amaal Jantjies, Janick Adonis and alleged underworld figure Nafiz Modack. Modack, with former rugby player Zane Kilian, also faces a charge linked to Kinnear’s murder. The only elusive piece of the puzzle is the gunmen who fired the fatal shots.

Reflecting on the honour bestowed on her husband and other officers, Kinnear’s widow said: “The boys and I walk the steps at the Union Buildings in your honour. For us as a family we are confronted with mixed emotions.

“We deem it such an honour having your name placed on the memorial wall at the Union Buildings… How I wish it was under different circumstances,” she said.

Kinnear’s commitment is encapsulated in his wife’s message: “For 30 years you lived and served with so much passion and dedication. You gave more than your all.” DM/MC 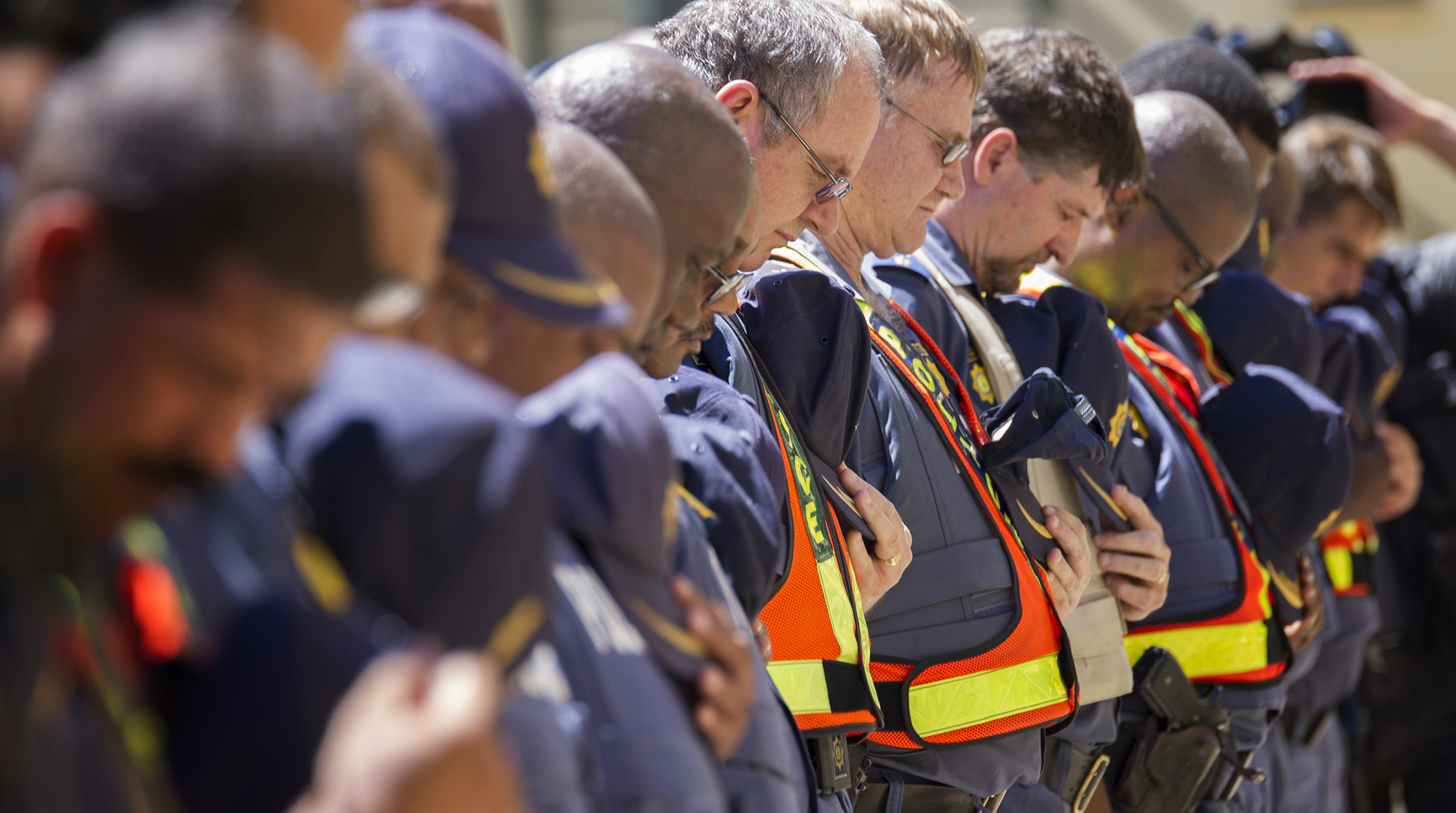 OPINIONISTA: Preventing xenophobic attacks in South Africa is possible: Look no further than the state response to the July unrest