by mark hunter
in Africa News
Reading Time: 2 mins read
A A
465
SHARES
1.8k
VIEWS
Share on FacebookShare on Twitter

Binance has questioned the strength of a warning given by South Africa’s Financial Sector Conduct Authority
FSCA warned South Africans over using the exchange because it wasn’t regulated
Binance pointed out that FSCA doesn’t regulate any cryptocurrency entities and they are working with another body, the FIC

Binance has questioned the jurisdiction of South Africa’s Financial Sector Conduct Authority (FSCA) after the regulatory body became the latest to warn its citizens about the exchange. The FSCA last week warned South Africans to be “cautious and vigilant” when using Binance because the FSCA hadn’t given them authority to operate its services within the country. Binance has since hit back, saying that the FSCA themselves admitted that they were not able to oversee the company anyway, and that Binance has been speaking to another regulatory body in the country over such matters.

FSCA Admits it Doesn’t Regulate Cryptocurrency
The FSCA became the latest financial regulator to warn citizens over using Binance on Friday, stating that the exchange is “not authorised to give any financial advice or render any intermediary services”. Because of this, the FSCA warns, “if something goes wrong, you’re unlikely to get your money back and will have no recourse against anyone.”

The letter also warned that “crypto-related investments are currently not regulated by the FSCA or any other body in South Africa”, raising the question of how Binance could be authorized anyway even if it wanted to.

Binance Questions FSCA’s Authority
Binance referenced this fact in its reply, explaining in a statement that it does not provide “financial advice or intermediary services”, and even if it did the FSCA could have little to do about because, as they admitted themselves, they do not regulate crypto-related investments. Instead, the statement said that the company was “continuously collaborating with the FIC (Financial Intelligence Centre)”, a group that cracks down on financial crime such as money laundering and the financing of terrorism.

Binance has been under the cosh in 2021, with several national regulators warning the citizens of its countries over using it, but so far the warnings have led to little actual action. 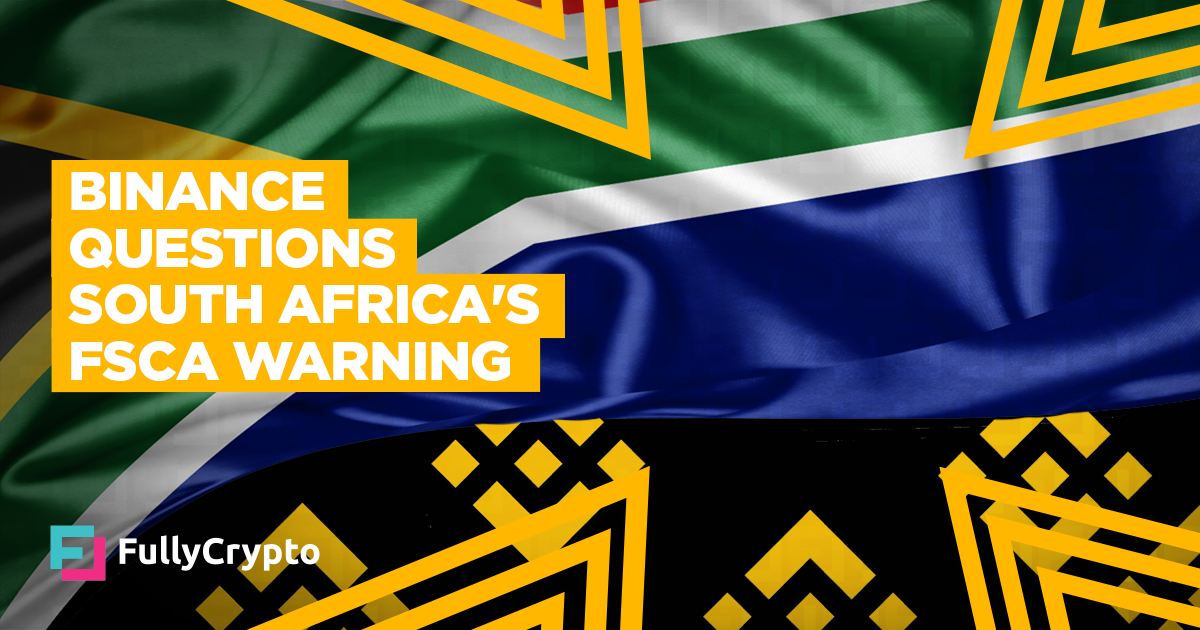