by richard read
in COVID-19
Reading Time: 9 mins read
A A
465
SHARES
1.8k
VIEWS
Share on FacebookShare on Twitter

For decades, Oregon’s health system was envied across the nation.

Managed care organizations enrolled a large share of the population. The Oregon Health Plan, conceived in the 1990s, made care more available to the working poor.

The system ran lean. Reformers emphasized primary and preventive care, allowing the state to operate with the fewest hospital beds per capita in the nation.

Then came the latest coronavirus surge. With the Delta variant sweeping through the state, the scarcity of beds is suddenly a liability.

Hospitals in rural areas with low vaccination rates have run out of space, leaving COVID-19 patients backlogged on beds in emergency-room hallways, waiting for admission to maxed-out intensive care units.

Patients from the southwest corner of Oregon, which has borne the brunt of the surge, were being transported to larger cities. But even urban hospitals were struggling to handle the state’s fifth wave of COVID-19.

“We have patients that have died in emergency departments waiting for beds,” said Becky Hultberg, president and chief executive of the Oregon Assn. of Hospitals and Health Systems. “In parts of Oregon, we are looking at a system in a state of collapse.”

Gov. Kate Brown has deployed 1,500 members National Guard to more than 20 hospitals to clean, deliver supplies and defuse arguments between healthcare workers and patients and their families. Hospital officials are casting around for stopgap solutions, converting offices into clinic space and appealing to the public to get vaccinated.

The crisis is particularly vexing because on paper Oregon appears in fairly good shape compared with other states.

Over the last week, it has recorded an average of 49 new cases a day per 100,000 people, just above the national rate and less than half the rates in Mississippi, Louisiana and Florida — the hardest-hit states.

Oregon’s hospitalization rate is 22nd in the country and its death rate is 20th.

But the severity of the surge is magnified by the fact that Oregon has just 1.6 hospital beds per 1,000 people — compared with a national average of 2.8 — and a shortage of healthcare workers to staff them.

A record 866 COVID-19 patients were hospitalized, 241 of them in intensive care.

In the hard-hit rural southwest corner of the state, the three hospitals that make up the Asante health system were more than 90% full — and that was after they brought the total number of beds from 550 to 650 by converting single rooms to doubles and stationing gurneys in the hallways.

Each nurse was handling seven or eight patients, compared with the usual four.

Asante had more than 160 COVID-19 patients — a total that has been rapidly rising and was expected to surpass 200 this week.

All elective surgeries have been canceled.

“If you’re not at risk of losing life or limb within 24 hours, you don’t have a surgical procedure in our facility,” said Dr. James Grebosky, the system’s chief medical officer. “We’re holding onto 64 patients who are ready to be discharged, but we’re unable to find accepting facilities for them.”

He said the region is home to 10% of Oregon’s population but accounts for more than a quarter of the state’s COVID patients.

That is in large part due to subpar vaccination rates — 46% in Jackson County and 40% in Josephine County, compared with 57% statewide and 51% nationwide.

While the surge is concentrated in politically conservative counties, its effects are being felt more widely as hospitals in other parts of the state struggle to handle the overflow of patients.

Many have wound up in Bend, central Oregon’s largest city, at St. Charles Medical Center, which last week converted an adjacent building into an urgent-care clinic. On Friday, the hospital had just 14 of its 225 beds available.

The St. Charles Health System, which includes three other hospitals in outlying towns, has canceled or postponed nearly 3,000 surgeries for conditions including cancer, heart disease and neurological disorders.

The system is also contending with a labor shortage affecting the healthcare industry statewide. Nurses were in short supply nationally even before the coronavirus struck, and burnout during the pandemic has led many to quit.

With 3,400 full-time employees, St. Charles has 800 open positions, of which almost 200 are nursing vacancies. At a recent job fair, only 16 people showed up.

Like many Oregon hospitals, St. Charles has a backlog of inpatients — 29 on Friday — who are healthy enough to discharge. But it’s having trouble finding space in skilled-nursing facilities, which are either also full or unwilling to take in COVID-19 patients.

Larry Levitt, Kaiser Family Foundation executive vice president, said that Oregon and other states caught in surges were still “making it up as they go along, and not fully prepared for this crisis.” To create surge capacity, “you almost need the public-health equivalent of military reserves.”

The most prominent architect of health system reform in Oregon was John Kitzhaber, a former emergency-room doctor who served as governor for 12 years between 1995 and 2015. The approach, which minimized expensive hospitalizations, drew acclaim for providing maximum health benefits to a broader population, although critics saw it as rationing.

In an interview Friday, Kitzhaber noted that the state saved money, committing to the federal government to reduce growth in Medicaid spending while creating a system of community care organizations to operate on a fixed budget, helping recipients manage chronic conditions like diabetes.

But he also acknowledged that reformers didn’t design the system to handle a crisis on the scale of the pandemic.

“You can’t plan your system around an event like this,” he said. “What we didn’t do is plan for the event itself.”

In any case, higher vaccination rates would have reduced the strain on hospitals, he said.

Health workers in southern and central Oregon are dismayed that the vaccination drive appears to have stalled and members of the public seem unaware or unconcerned about the hospital crisis.

“Who knows, I might die of COVID next week, but I sincerely doubt it,” said Cassandra Torgrimson, a 49-year-old school receptionist in Bend.

She said that she quit a previous retail job to avoid having to wear a mask and saw no need to get vaccinated, believing that herbs, essential oils and fresh air would keep her healthy.

Another resident, Mary Moore, said she did get vaccinated, but also shunned masks and regarded health workers’ complaints as overblown.

“They’re whining,” said Moore, 59, a retired hospital administrative worker. “That’s the job they signed up for.”

It wasn’t long ago that Oregon, like much of the country, seemed to be emerging from the pandemic. In late June, Brown lifted social distancing rules, capacity limits on bars and restaurants, and a requirement for masks in public spaces.

“Brighter days are ahead,” the governor said at the time. “It means, effectively, Oregon is 100% open for business.”

But since then the average number of new infections each day has jumped from fewer than 200 to more than 2,000.

This month, Brown re-instituted the mask mandate, regardless of vaccination status.

On Thursday, she announced that health workers would no longer be allowed to opt out of vaccinations by being tested regularly for COVID-19. “We need every single front-line healthcare worker healthy and available to treat patients,” she said. 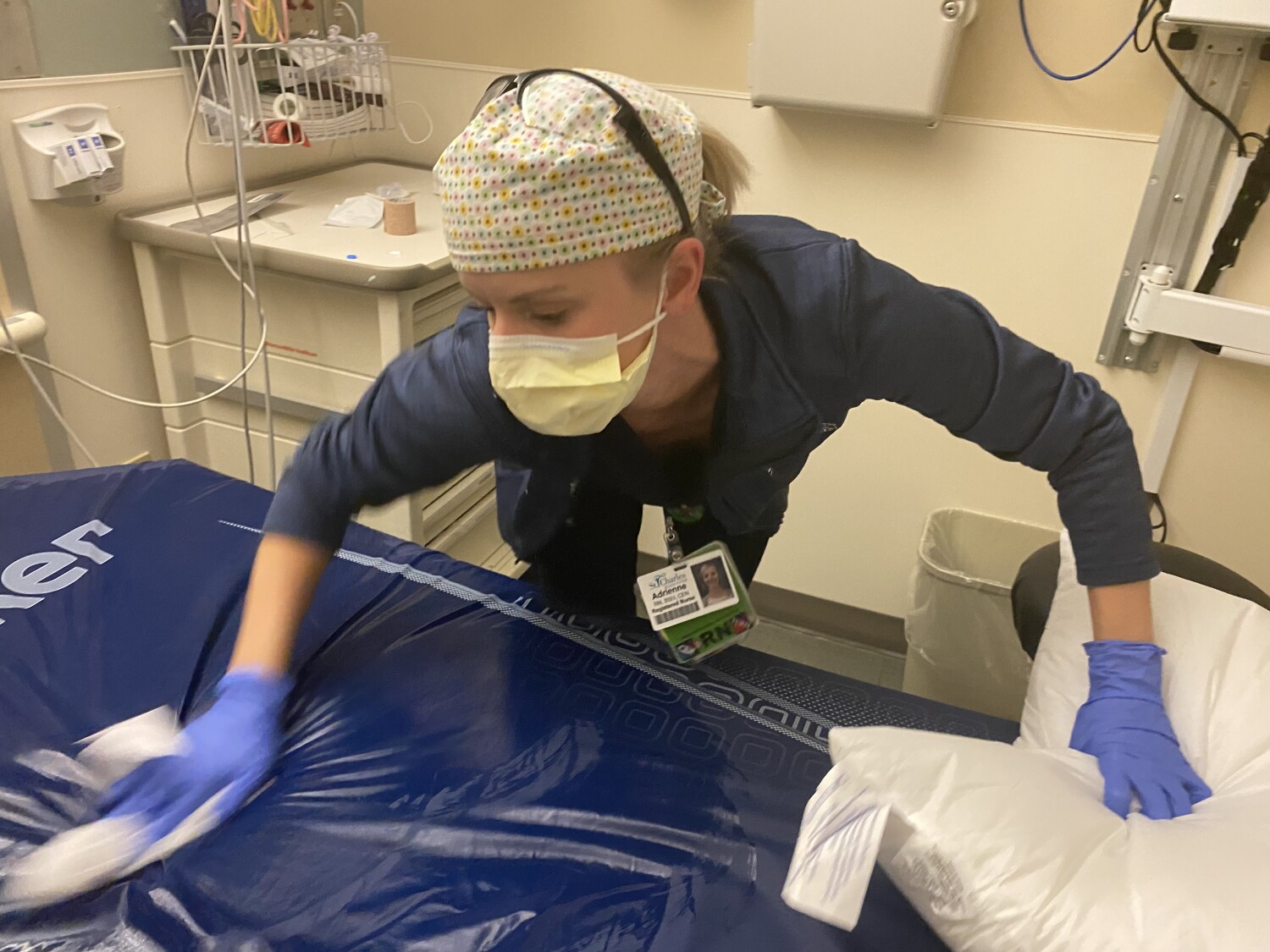 It Took a Week, But Biden Finally Got Afghanistan Right

It Took a Week, But Biden Finally Got Afghanistan Right