by yuri lanz
in Africa News
Reading Time: 6 mins read
A A
466
SHARES
1.8k
VIEWS
Share on FacebookShare on Twitter

What do a former Bok coach, an ex-police chief, a media personality and a poo-chucking activist have in common? They’re among the candidates contesting the local government elections.

Well over 60,000 South Africans are standing for November’s local government elections – and the lists of candidates and parties released by the Independent Electoral Commission (IEC) are as diverse as the population itself.

Among the candidates are a former Springbok rugby coach, a media personality, a former Kaizer Chiefs star, Johannesburg’s ex-police chief and a poo-chucking activist.

The IEC’s lists also give the first official hint as to the identity of the ANC’s mayoral candidates in the major metros. Although the ANC has declined to confirm any names thus far, it is traditional for the candidates topping the party lists to serve as mayor if successful.

The ANC’s top candidate in the City of Johannesburg is mayoral committee member for Group Corporate and Shared Services, Loyiso Masuku, wife of tainted former Gauteng health MEC Bandile Masuku, who was axed for his role in the Covid-19 PPE procurement scandal. Masuku’s own potential involvement in this corruption frenzy is still the subject of concern to the DA.

She was also criticised earlier this year after a video emerged of her eating chicken feet while campaigning at an informal settlement in Johannesburg in May “for the sake of the vote”, to quote the words she is heard saying in the video.

In Tshwane, Kgosi Maepa looks to be the party’s mayoral contender – but he is viewed with some suspicion by party members for a history that includes a stint working with the FW de Klerk Foundation. In eThekwini, meanwhile, it’s Thabani Nyawose, whom New Frame described last year as “an eThekwini municipal official with Bible-thumping religious zeal who is largely unknown outside the party”.

The disenchantment of ordinary South Africans with service delivery is evident from the composition of the IEC lists. They show that more people than ever are running as independent candidates, particularly in KwaZulu-Natal.

There is also evidence of increasing numbers of new political entities based on community members with grievances coming together, such as the Concerned Drakenstein Residents group in the Western Cape, or the Oudtshoorn Gemeenskap Inisiatief (Oudtshoorn Community Initiative).

The IEC’s lists reveal that the splintering of the electorate into laagers based on identity, long predicted by analysts, is very real. Young South Africans can vote for the Youth Independence Party and Youth Associates in some wards; those longer in the tooth may want to opt for the Disability and Older Person Political Party.

If you are a Muslim in the Western Cape who intends to vote for a party founded on Islamic principles, you have multiple options: the African Islamic Movement, Al Jam-ah, the Cape Muslim Congress, or Sizwe Ummah Nation. Even supporters of relatively niche causes, like Khoi-San rights, are spoiled for choice.

South Africa has taken a long time to wake up to the realities of climate crisis, but unlike in 2019, there is an environmentalist party on some ballots: The Greens.

Notably absent, however, are parties centred on women’s rights. The Women Forward party, which contested the 2019 general elections but only won around 5,000 votes nationally, appears to have fallen off the lists altogether.

But the lists do reveal some anomalies to the wider trend of groupings based on race or religion. In the Western Cape, there are at least two black candidates running for a party often assumed to be the sole province of white Afrikaners: the Freedom Front Plus. The ANC’s youngest candidate is 20-year-old white student Christiaan Carstens, running in Jeffrey’s Bay in the Eastern Cape.

The spirit of balkanisation evident globally in political projects such as Brexit is also in the air in South Africa. In addition to the Cape Independence Party, which has been campaigning vigorously for a referendum on whether the Western Cape should secede from the rest of South Africa, there is also a KZN Independence party with a similar goal for KwaZulu-Natal.

Turncoats, celebrities and the strange

The run-up to elections usually sees a flurry of political defections to and from parties as politicians jostle for the best possible positions on lists. This year’s municipal polls are no exception.

One of the most significant floor-crossings could be that of well-respected former EFF representative Mandisa Mashego, who is contesting the City of Johannesburg for a party that gets relatively little airtime but actually has a fairly significant national reach: the Abantu Batho Congress. Mashego was courted by a number of parties, so her choice of ABC is a coup for the party. The EFF has lost another heavyweight in Western Cape advocate Thulasive Twalo, who is now topping the list for the Land Party in the City of Cape Town.

Lennit Max, the Freedom Front Plus’s mayoral candidate for Cape Town, is one of a number of high-profile defections from the DA of candidates of colour in recent years who will not hold back in criticism of his former political home. This will add to the headaches the DA is already facing from the Good party, which is stacked with former DA insiders eager to spill the beans.

Proving that factionalism is not just for the ANC and DA but can afflict even those political outfits in touch with a higher power, the African Christian Democratic Party is seeing at least three rival Christian parties contesting the polls led by disenchanted former ACDP figures: the Africa Restoration Alliance, the United Progressive Party of SA and Change.

A number of parties are placing their faith in well-known public figures to bring home the votes – though there is little evidence that this is a successful electoral strategy in South Africa. Perhaps most unexpected was the announcement by the African Transformation Movement, the party that features Mzwanele Manyi as chief strategist, that media personality Kuli Roberts would be standing for election for the party in Tshwane.

The sporting world is also contributing some new political contenders. Former Springbok rugby coach Peter “Div” de Villiers is the Good party’s top pick in the Drakenstein municipality in the Western Cape, of which Paarl is the largest town. Div has a reasonable chance of getting elected.

More remote are the hopes of former Kaizer Chiefs striker Kenny Niemach, who is number seven on the list for the little-known United Independent Movement in Ward 31 in Ekurhuleni.

Herman Mashaba’s Action SA will be hoping that residents of Johannesburg have fond memories of the tenure of former police chief David Tembe, who is one of the party’s candidates.

In Cape Town, journalist Donwald Pressly, former head of the Parliamentary Press Gallery Association, has made it on to the DA list at number 101. Also in Cape Town, activist Loyiso Nkohla – who made headlines a decade ago by dumping poo at public sites around Cape Town as part of a protest about inadequate sanitation – is back on the ballots for Gayton McKenzie’s Patriotic Alliance. This is Nkohla’s fourth political home, after the ANC, the Land Party and a brief stint at the DA through then Cape Town mayor Patricia de Lille.

Controversial activist Andile Mngxitama’s Black First Land First party is also back on the ballots after being suspended by the IEC for having a constitution that banned membership to white people, but which has since been amended. Mngxitama is BLF’s top candidate for the City of Johannesburg.

Some parties are so small that they lack any web presence whatsoever (Democratic Equality Empowerment Party, take a bow; African Ambassadors of South Africa, likewise).

A rose by any other name…

For those who thought Hollywood screen icon Gregory Peck was long dead, he is reincarnated as the DA’s number 214 in the City of Cape Town.

The DA’s Vasco da Gama continues to explore new territory as a candidate for Johannesburg.

And for political party names sure to stand out, raise a glass to the Organic Humanity Movement, the Royal Loyal Progress, the Khoi-San Heavenly Movement, and the African Basic Republicans. DM168 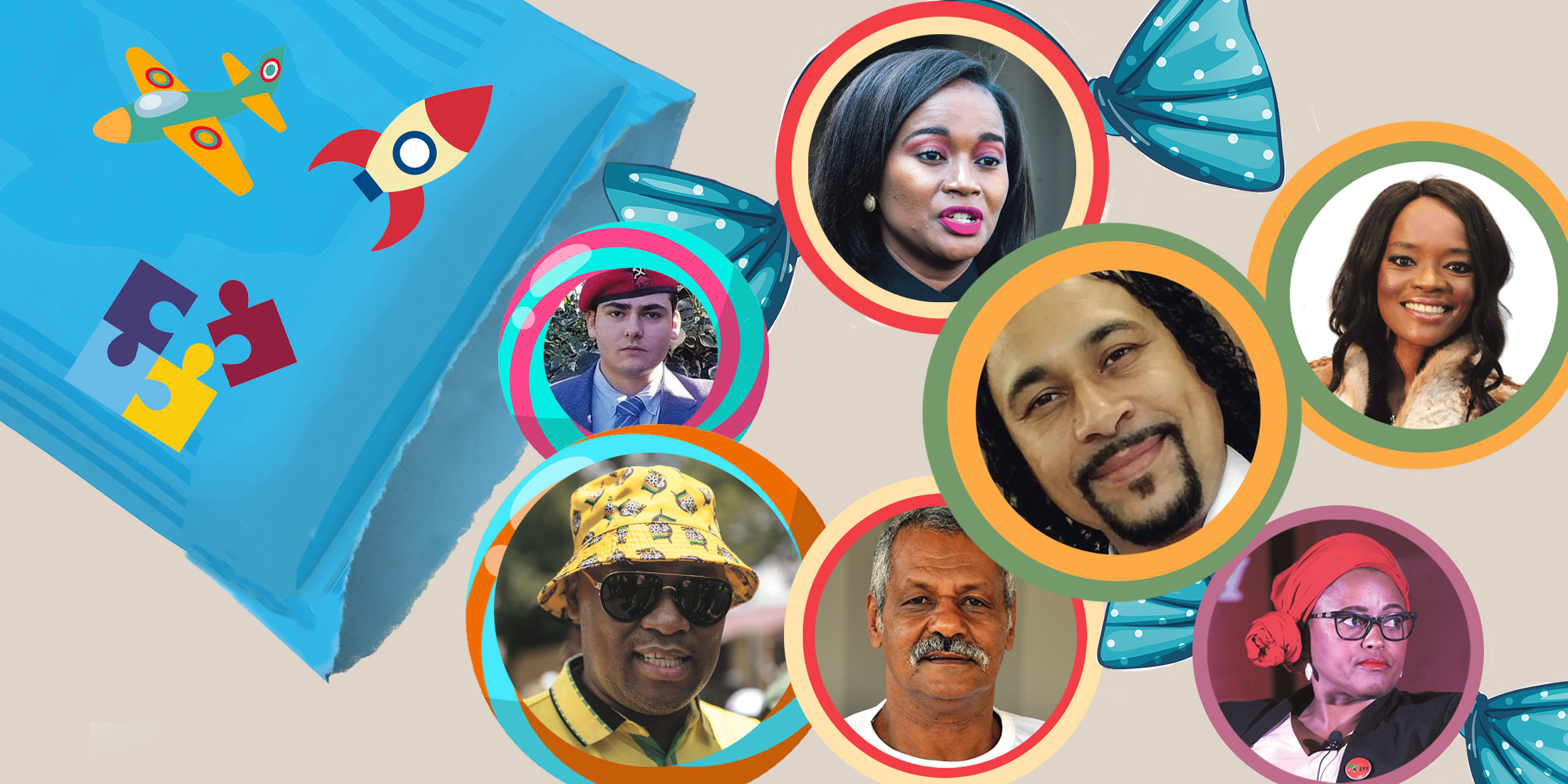 Art’s part in being African and queer

Art’s part in being African and queer