by elroy mcnaught
in Africa News
Reading Time: 3 mins read
A A
466
SHARES
1.8k
VIEWS
Share on FacebookShare on Twitter

325 political parties are contesting this year’s local government election alongside more than 1,700 independent candidates. In exactly one month, South Africa will head to the polls. On Friday, parties pledged their compliance to the electoral code of conduct amid political killings and allegations of vote-buying.

On Friday, 1 October, political parties signed the electoral code of conduct for the 2021 municipal elections at the Nasrec Expo Centre in Johannesburg. A draw was also held to determine the order of contesting parties on the ballot papers.

Briefing the media, chairperson of the Electoral Commission (IEC), Glen Mashinini said that by signing the document, parties commit to conducting themselves in a manner conducive to free and fair elections.

The signing comes exactly a month before South Africa heads to the polls and as political killings rear their ugly heads. In Tshwane and KwaZulu-Natal, ANC members were recently gunned down.

Lesser-known party, Ingubo Yeskhethu was selected through a random draw during the ceremony to appear first on the ballot in the regions where it is contesting elections.

The DA’s John Steenhuisen as he signs the Electoral Code Of Conduct.
Photo: Shiraaz Mohamed.
Mashinini said this municipal election is “record-breaking”. 325 political parties are contesting the November elections. 99,116 candidates were nominated, 63,409 of which are ward candidates and the remaining 35,707 are PR candidates. 1,718 are independent candidates.

Candidate nominations closed on Tuesday, 21 September after the Constitutional Court dismissed an urgent bid by the DA to block the second round of candidate registrations, citing undue benefits for the ANC.

The code of conduct must be agreed to by all registered parties and candidates before they participate in the election. Breaking the code of conduct is a criminal offence that can result in a fine or up to ten years in prison.

325 Political parties will be contesting this year’s local government elections. Each is dutybound to agree to and sign the electoral code of conduct. (Photo: IEC Twitter.)
Mashinini explained that members of political parties and the public have the right to approach the Electoral Court to report allegations of violations of the code of conduct with the necessary evidence.

“Cases where criminality is involved, such as the defacing or damage to property, should also be reported to the South African Police”.

To combat the spread of disinformation, the Commission partnered with Media Monitoring Africa to launch an online whistleblowing platform called real411.org. Here members of the public can report instances of disinformation they spot on social media. This platform is not intended to replace existing reporting channels for misconduct, said Mashinini.

Read more about the electoral code of conduct here.

WHAT IS THE ELECTORAL CODE OF CONDUCT? It’s a set of rules that promotes good behavior and collaboration between political parties, candidates and the Electoral Commission. The Code makes it easier to have free & fair elections. Learn more at https://t.co/NTvIYCJBCq. pic.twitter.com/UkkM5XqE5n

More than 26.2 million people are registered to vote in this year’s election, of which 55% are female. Gauteng has the biggest representation on the voter’s roll with about 6.1 million voters, followed by KwaZulu-Natal with approximately 5.4 million voters.

The largest age group is the 30 to 39-year-old category with around 6.7 million voters — nearly a quarter of all voters.

Registration for special votes opened on 20 September and will close on 4 October. To date, 314,392 special vote applications have been received.

Parties were each given an opportunity to sign and a brief window to pledge their compliance with the code of conduct and espouse their ideology. Those parties which were not present at the ceremony will sign the code of conduct in their respective provinces.

Action SA’s Herman Mashaba as he is about to sign the Electoral Code Of Conduct.
Photo: Shiraaz Mohamed.
First to sign the code was ActionSA leader Herman Mashaba. His fledgling party almost missed their chance at contesting elections in their stronghold Gauteng after the party’s candidates were omitted from the IEC lists in the province due to a clerical error on the Commission’s side.

On behalf of the ANC, treasurer-general Paul Mashatile said the party would not tolerate “any breaches to the code” and “any ANC member that contravenes the provisions will be dealt with by the criminal justice system and the ANC disciplinary processes”. Over the weekend, Mashatile was accused of handing out money to congregants at a church service in Limpopo while the party was campaigning. Mashatile denied he was buying votes after the incident was caught on camera and shared on social media.

In her closing remarks, IEC Vice Chairperson Janet Love urged political parties to refrain from perpetuating fake news through the use of “innuendos” and “allegations” presented without fact. She welcomed the implementation of the Political Party Funding Act and called it a “vital tool to our democracy”.

“We are very committed to ensuring that it is adhered to,” said Love. DM 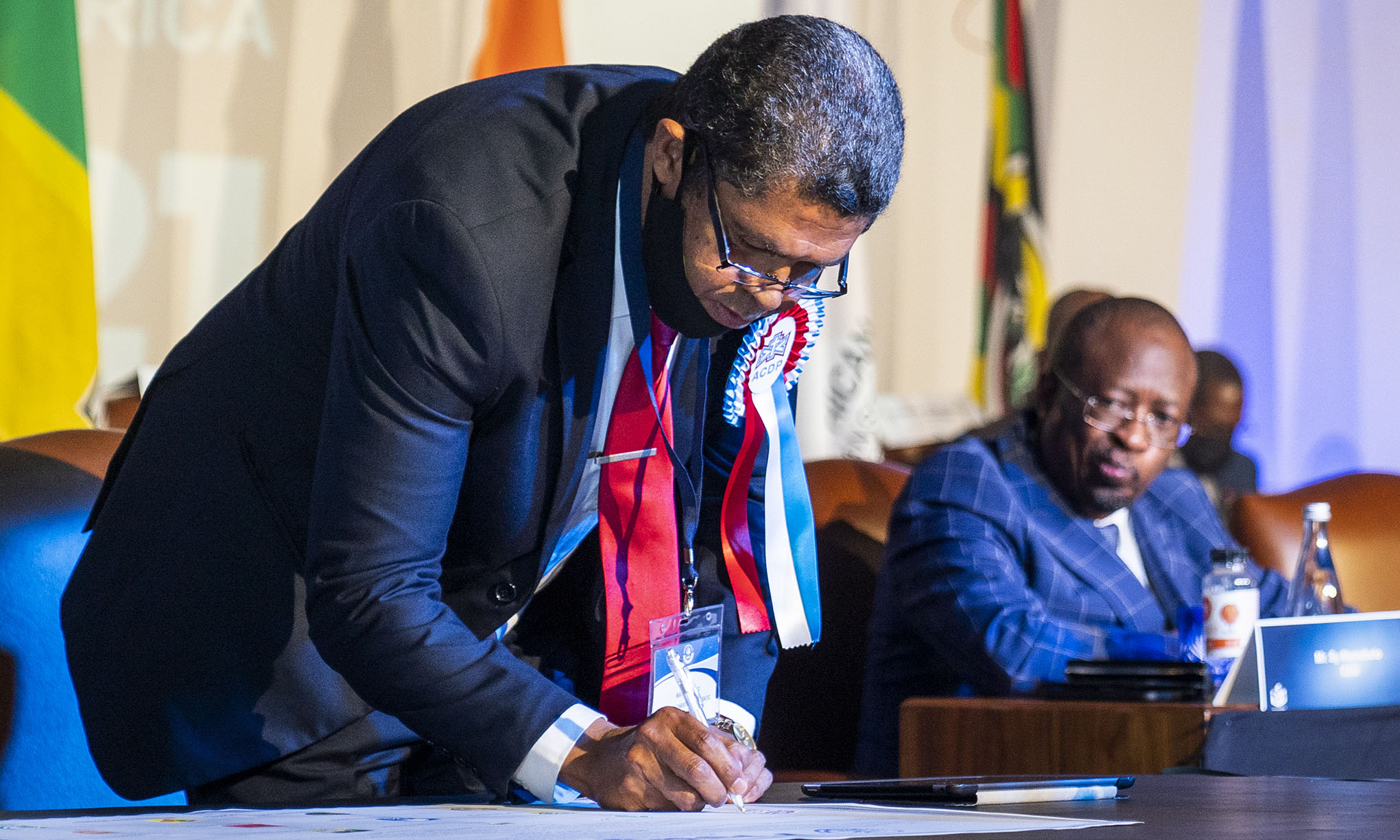