by georgianna michaud
in COVID-19
Reading Time: 5 mins read
A A
476
SHARES
1.8k
VIEWS
Share on FacebookShare on Twitter

Delta variant ‘is a different kind of beast’ says Walensky

Sign up HERE for science breakthroughs in health, business and more that matter

The breakthrough comes amid calls from the head of the World Health Organization (WHO) for countries not to stockpile their vaccines for booster jabs. A study carried out in Israel has examined the effectiveness of a third Pfizer jab as concerns mount for the spread of the Delta variant. Unlike the original strain of SARS-CoV-2, the Delta variant is much more contagious and easily transmittable, accounting for 80 percent of all new infections in the US in late July.

But there is new hope this mutated variant can be tamed with an additional shot of the Pfizer-BioNTech vaccine.

According to Israeli researchers in Jerusalem, patients who have received a booster jab boasted four times greater protection against the coronavirus.

Data from the Ministry of Health of Israel also appears to show the booster is five to six times more effective at protecting seniors from serious illness and hospitalisation than the regular two doses.

The Pfizer vaccine was recently approved by the US Food and Drugs Administration (FDA) and the Israeli government has already approved the rollout of booster shots in July this year for people over the age of 60.

The Pfizer vaccine is administered in two doses (Image: GETTY)

More recently, the booster programme was extended to people above the age of 30.

According to the WHO, Israel has reported more than one million Covid infections since the pandemic began, as well as more than 6,800 deaths.

As of August 21, more than 12.7 million vaccines have been administered across the country.

About 80 percent of Israel’s population has already received two doses of the vaccine, and about 1.4 million people have had a booster.

To put the numbers into perspective, Israel has a fairly small population of about 9.05 million.

Naftali Bennett, Prime Minister of Israel, said on Sunday: “Israel has a major advantage today because we are world pioneers in using the third vaccination, and we have a better understanding about the rate at which the previous vaccinations are waning, and what we need to do, when we need to do it, and even for what ages.

“My advice to every world leader today is to start the third vaccination straight away, don’t wait.

“Give it five months from the second vaccination, otherwise you will have false illusions about protection.”

But the call for booster shots runs in contradiction to the WHO’s narrative.

DON’T MISS…
Covid-22 is the new ‘big risk’ that could ‘get worse’ than Delta [REPORT]
Could nasal sprays hold the key to defeating the Delta Covid variant? [INSIGHT]
Coronavirus: Sign mistaken for being ‘ordinary’ may be primary symptom [EXPLAINED]

How do the various COVID-19 vaccines compare to one another? (Image: EXPRESS)

The delta variant of coronavirus is much more contagious (Image: GETTY)

The head of the WHO has surprisingly urged people against taking booster shots, citing issues of privilege and inequality in vaccine rollouts.

Director General Tedros Adhanom Ghebreyesus told reporters this week he was “really disappointed” to see developing nations stockpile their Covid jabs, considering how many developing nations are struggling to inoculate their populations.

He called on nations offering third vaccines to instead “share what can be used for boosters with other countries so they can increase their first and second vaccine coverage”.

Evidence has emerged to show Covid vaccines, although effective, offer weakened protection in time, which makes the case for a booster shot after the initial two.

According to Doron Gazit, a member of the Hebrew University’s COVID-19, handing out boosters to Israelis over the age of 60 has proven to slow the rate of infection in the last 10 days.

He told Reuters: “We attribute this to the booster shots and more cautious behaviour.”

It is estimated more than half of people over the age of 60 have already received the third jab.

Some are, however, uncertain whether widespread booster jabs can truly eliminate the threat posed by Delta.

Dvir Aran, a biomedical data scientist at Israel’s Institute of Technology, said: “It will take a long time until enough people get a third dose and until then thousands more people will getting serous ill.” 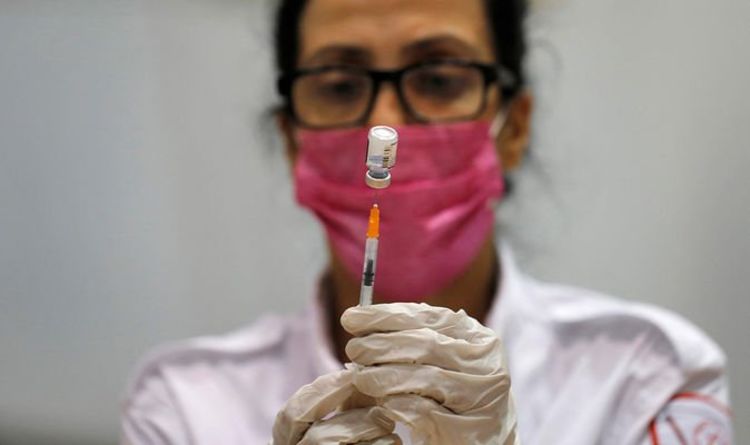 The item that you have requested was not found. Possible causes: The address was entered incorrectly The item no longer...

Secretary of Health in the Tobago House of Assembly (THA) Tracy Davidson-Celestine is worried that the island could have a...

Late last week Joe Biden went before TV cameras to deliver a passionate appeal for tax fairness. “This is our...