by elroy damron
in Africa News
Reading Time: 4 mins read
A A
465
SHARES
1.8k
VIEWS
Share on FacebookShare on Twitter

Mokgadi Itsweng describes her debut cookbook, Veggielicious, as a “plant-based offering from the garden of my dreams”. She hopes that her work will act as “a guide to transitioning from meat-based cooking to plant-forward cooking” and offers readers an elegant overview of the personal and political reasons why this culinary conversion is necessary.

Mokgadi Itsweng. (Photo: Roelene Prinsloo)
Chef Itsweng is not alone in advocating for a plant-forward food culture. It is now almost impossible to swing a fennel frond without hitting a cookbook catering to this rapidly growing sector of society. Given the almost exponential increase in publications devoted to the topic, the question potential readers need answered is whether Itsweng’s opus offers original insights?

The answer is absolutely yes. With a few beautifully notable exceptions – my favourite being Bryant Terry’s Afro-Vegan: Farm-Fresh African, Caribbean, and Southern Flavors Remixed – most plant-forward recipe books focus on Asian or European food genres. Where our continent is included in the mix, the recipes are predominantly East and West African rather than South African. Which is odd because South Africa has a long history of plant-based eating patterns. As Mpho Tshukudu, dietician (and my co-author on the 2016 recipe book, Eat Ting) observes, “The South African idea of ourselves is very carnivorous but traditionally our cattle were rarely consumed outside of sacred rituals. Obviously, there was amasi, fermented milk, but never to excess and mostly people ate it in combination with plant-focused meals such as dikgôbê (Batswana sorghum and bean melange), Venda-style tshidzimba (groundnuts, bean and corn) or Xhosa umngqusho (samp and beans).”

In Veggielicious Itsweng offers plant-based recipes that reflect a range of South African ingredients and entertaining environments. Some dishes are unadorned, rural culinary classics. The rich, thick, blessedly comforting and creamy semphemphe pumpkin porridge (also known as isijingi) recipe is based on food the chef ate with her grandmother in Bolobedu. Some recipes (such as the coriander and pomegranate seed-laden sorghum salad) carry indigenous ingredients to new places that might surprise ancestral eaters. Some traditional flavour combinations have been reimagined but retain the taste and texture essence of the southern African region. Itsweng’s beetroot “hummus” recipe (actually a ditloo bean and beetroot blend with a generous dollop of peanut butter) is deliciously reminiscent of the bean and nut pastes that are so prevalent in many parts of Limpopo.

There is not a bland bite in the book. Every recipe presents plant-based food in terms of tastes gained rather than ingredients lost. The evocative prose and easy-to-follow instructions are a joy to read. Recipes have been designed for modern (read: time-poor, curious but often rut-bound) home cooks. Most of them are convenient enough to make on a work night, but elegant enough to serve at a dinner party. Itsweng’s words are elevated by Roelene Prinsloo’s eye-catching photography and Charmaine Ramalope-Makhubela’s superb styling.

While she is entirely her own chef, the author is recognisably part of an epicurean apostolic succession. Itsweng worked with the late, great Dorah Sitole for many years and thanks her “for seeing me, guiding me and pushing me to do this project”. She learnt from the best and it shows. Veggielicious has the accessible, affordable, nurturing yet stylish, modern African essence that Sitole championed. Mam D’s celestial pride in her protégé sparkles at the turn of every page. And there can be no higher praise than that…

Impepho or wild sage is an indigenous African herb that is widely used by traditional healers in spiritual prayer rituals. The herb is also used as an antifungal, antiseptic and anti-anxiety medicine. It adds so much flavour to any food it is smoked with. I use a kettle braai for smoking, but you can follow the quick smoking hack that I have included in the recipe.

Handful of dried impepho herb, for smoking the cauliflower

Salt and pepper to taste

Salt and pepper to taste

Bring a saucepan of water with 1 teaspoon (5 ml) salt to a boil, then add the cauliflower head. Cook for 10 minutes, then drain and set aside.

Quick hack: Use your oven as a smoker. Place the impepho on an oven tray, light it and when it starts to smoke place the tray on the bottom rack of the oven. Then place the cauliflower on the rack directly above the impepho. Close the oven and allow to smoke for 5-10 minutes.

Mix the garlic with the olive oil and brush over the whole cauliflower. Season with salt and pepper. Place on a baking tray and roast in the preheated oven for 30 minutes until crisp on the outside.

The cover of Veggielicious.
While the cauliflower is roasting, make the sauce by first roasting the peppers in the oven until the skins are blackened.

Remove the peppers from the oven and place in a bowl, cover with cling wrap and allow to cool for 10 minutes.

Once cooled, peel the skins off and blend the peppers, then set aside.

Heat the oil, then add the garlic and paprika, and cook for 2 minutes on medium heat. Add the blended peppers and cook for 5 minutes, stirring continuously to ensure that the sauce doesn’t stick and burn.

Add the lemon juice and brown sugar, cook for a further 2 minutes, then season with salt and pepper. 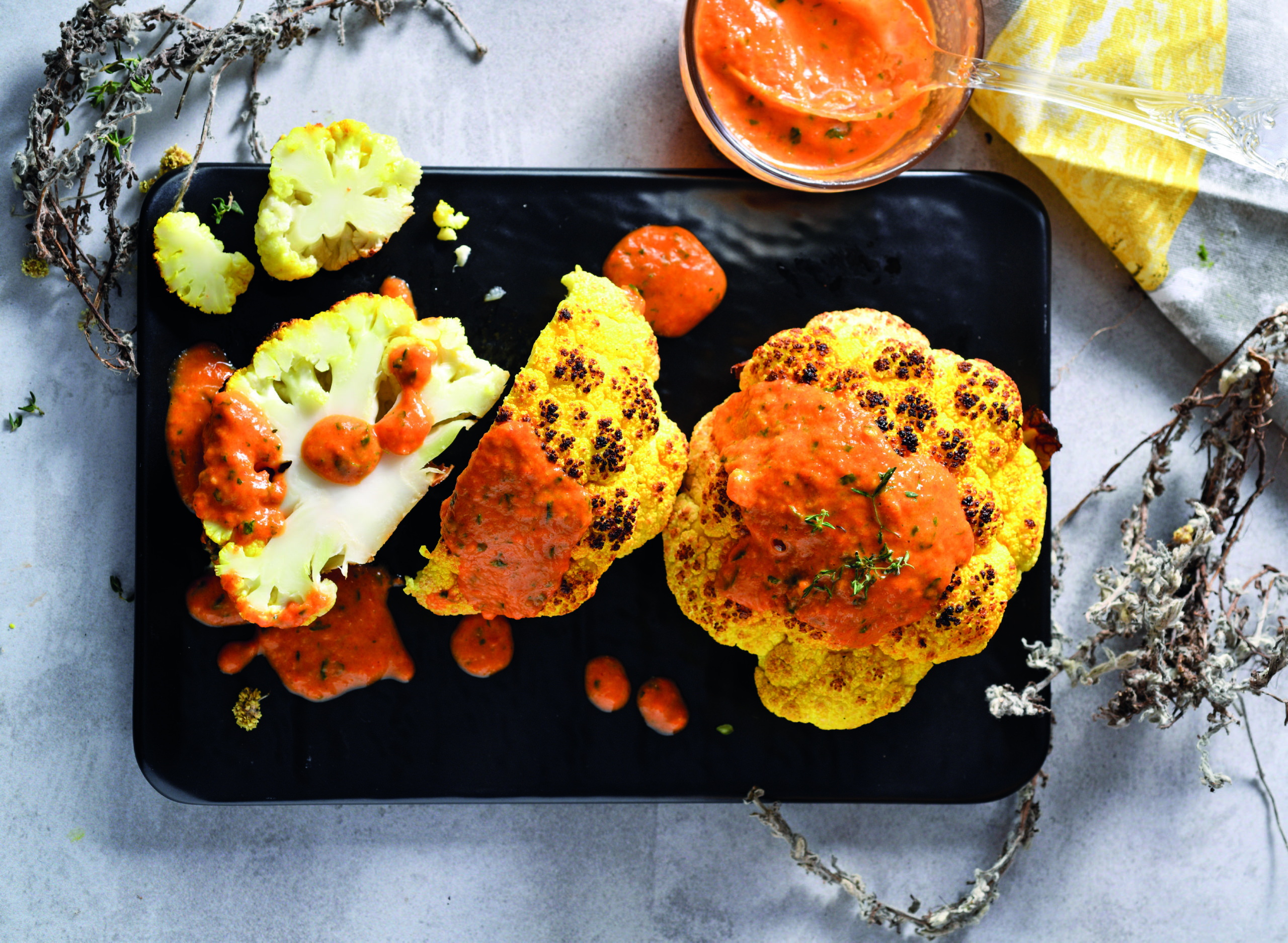