by scott roxborough
in Africa News
Reading Time: 3 mins read
A A
465
SHARES
1.8k
VIEWS
Share on FacebookShare on Twitter

People have a hard time placing Daniel Donskoy. That’s just the way he likes it.

“In London, people would say: ‘Are you South African?’ Yes. ‘Danish?’ Yes. I always say yes. I’m anything you want me to be,” says the 31-year-old actor, who was born in Moscow and raised in Germany, Israel and the U.K. “I’ve been lucky that people can’t pigeonhole me. It lets be everything. If I only took roles based on my identity, I’ve never get work. How many jobs are there for a Russian-German-Jewish-British-Israeli?”

In Donskoy’s case, actually, quite a few. He’s played a Grand Duke (in the PBS series Victoria) and a Soviet General (on BBC’s spy thriller SS-GB), an Israeli gangster in HBO’s Strike Back, a Latin-speaking warrior (in Netflix’s German historic drama Barbarians), and Lady Diana’s lover James Hewitt in the latest season of The Crown. (Like Hewitt, Donskoy, who stands a muscular 6′ 3″ in his socks, is a natural ginger.)

In Germany, Donskoy is best known for Sankt Maik, a popular sitcom on national network RTL in which he stars as a con man who impersonates a small-town priest (think TVLand’s Impastor with more umlauts).

Donskoy’s latest role is as host of the 2021 German Film Awards, the German industry’s version of the Oscars, which will be held in Berlin Friday night.

Donskoy, who occasionally moonlights as a musician — he released his debut EP Didn’t I Say So in 2019 — even recorded an original track, titled Kino is Geil (Cinema is Sexy), especially for the occasion (see below).

“Germans, the German film industry, has a hard time really celebrating, patting itself on the back. But that’s what I want, a real celebration of German cinema,” he says.

Donskoy wasn’t even supposed to be an actor. He studied marine biology and media management before trying (and failing) to get a foothold in the worlds of ballet, opera, and musical theater. On impulse, he auditioned for an acting school in Munich.

“But a professor there told me the German system, which is all about artistic expression, about ‘finding yourself’ wasn’t for me, and he was right. I went home and googled ‘London Acting School.’ I found a school [London’s Arts Educational School] applied, got a scholarship and went. That’s how it has always been with me. Completely random. No plan at all.”

Donskoy worked at London’s West End and did guest spots on British series including Detectorists, Casualty and Victoria, before a (random) encounter in London brought him back to Germany for the Saint Maik job. That, in turn, led to an offer by German public broadcaster WDR to host a late-night talk show: Freitagnacht Jews (Friday Night Jews). The concept has Donskoy interviewing prominent German-Jewish personalities, including writer Max Czollek, actress Susan Sideropoulos and rapper Ben Salomo, about what it means to be Jewish in modern-day Germany.

“When they first asked me: do you want to do a talk show about being Jewish in Germany? I thought: fuck no! But I realized this show could be about any marginalized group,” he says. “And I learned myself how differently Jewish people see their identity.”

Raised in a secular family — “I got Bar Mitzvah-ed, that’s about it” — Donskoy says his experiences moving between countries and cultures have helped him understand identity, Jewish or otherwise, as more “the image people put on you” as anything fixed or inherent.

“I came to Germany as an immigrant, as a baby, so for a long time that was my identity,” he explains. “Then when I discovered my Jewish identity, I started wearing a Star of David and being the ‘cool German Jew’. But when I went to Israel, where everyone is Jewish, suddenly I became the German: ‘Daniel the Nazi.’”

He points to the irony of Freitagnacht Jews winning the local equivalent of an Emmy for best talk show Thursday, Sept. 16 — Yom Kippur.

“So you’re talking to a Jew who spent Yom Kippur at a German awards ceremony. And got very drunk afterward,” he quips. “God forgive me.”

For tonight’s award ceremony in Berlin, Donskoy is hoping to try on a brand-new identity: that of the all-around German-Jewish entertainer. That is something audiences here haven’t seen in a long, long time. 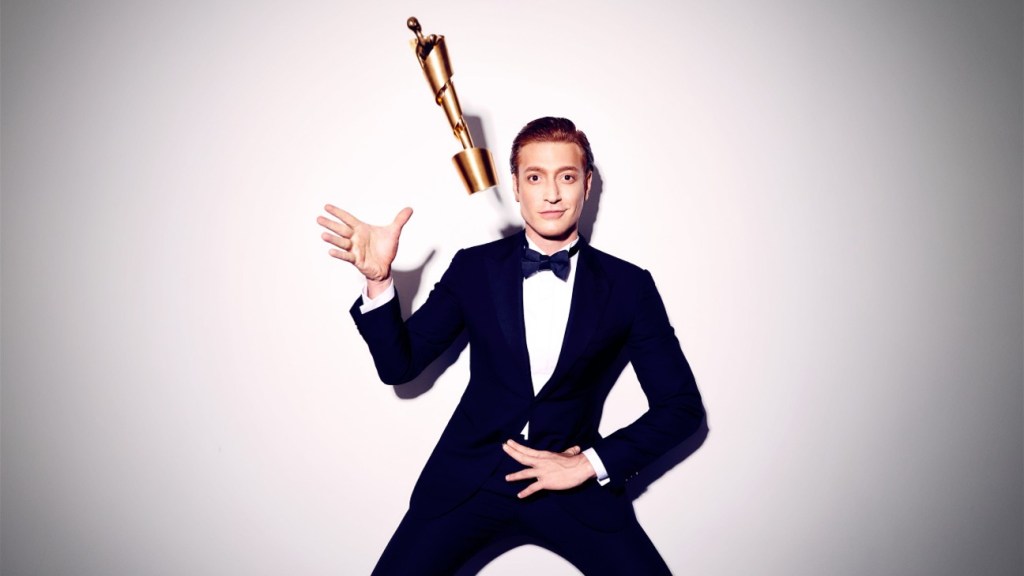