Proteas batter Lizelle Lee admits that South Africa’s chances at next year’s Women’s World Cup are “very good”.This is after the Proteas women dominated West Indies in the first of five ODIs in Antigua.Lee, who scored an unbeaten 91, says that her goal is to keep things simple as SA continue their stellar season.Proteas opener Lizelle Lee says that South Africa is ready for next year’s Women’s Cricket World Cup in New Zealand following their first ODI win against West Indies on Tuesday.

South Africa’s bowling attack once again dominated against the Windies as they clinched an eight-wicket win in the first of five ODIs in the Caribbean.

Fast bowler Ayabonga Khaka led from the front, returning figures of two wickets for 17 runs in seven overs, while captain Dane Van Niekerk (2/23) and Tumi Sekhukhune (2/32) helped restrict the hosts to 153 all out.

Lee and opening partner Laura Wolvaardt (36) continued their fine form as they shared an 88-run stand at Coolidge Cricket Ground.

Player of the match Lee scored her 21st half-century as she scored an unbeaten 91 off 126 balls, including 10 fours and a six.

Lee and Van Niekerk (17*) saw the Proteas reach their target of 154 with eleven overs to spare.

Speaking to reporters on Wednesday, the world number two batter Lee admits to enjoying her cricket as she looks to keep things simple.

“I’ve enjoyed my cricket these last few years and I think you can see it on the field. I especially enjoy the 50-over game, it’s the one where I stand out the most. I’m looking forward to the rest of the series as well,” said Lee.

I’m just trying to keep it as simple as possible and make sure I score runs for the team. I realised that as soon as I try and complicate things, then I struggle. The plan is to keep things simple.”

The five-match ODI series against West Indies is more important than ever as South Africa prepare for next year’s Women’s Cricket World Cup in New Zealand in March.

Lee believes that the Proteas have a really good chance at next year’s showpiece if they continue their stellar run this season.

“As a team, we’re just trying to get our combinations right, and we’ve done that already. It’s just making sure we know what we want to do and have that blueprint set and then when we get to the World Cup, there’s nothing to sort out,” said Lee.

“Our bowlers are fantastic, it’s great to see them bowl, especially in this heat. The batters are also doing really good so I feel at the moment, we are ready for the World Cup. We’re all looking forward to it and we have a very good chance to win it next year.”

The Proteas drew the three-match T20 series 1-1 and are hoping to secure their fourth consecutive ODI series win after beating New Zealand (3-0), Pakistan (3-0) and India (4-1)

However, winning in the West Indies won’t be easy for the Proteas with the conditions unfamiliar.

Lee admits that conditions have been challenging but argues that if SA continue to show intent, they can continue their form.

“They’re (West Indies) a very competitive team, they’re loud on the field and it sort of gets to you sometimes. The conditions is something else, last night was pretty tough as the pitch was rolling low and it was extremely humid. It was challenging,” said Lee.

“This tour is one of hardest even in a training session, you’re bat for 30 minutes and you feel like you want to pass out. Conditions are tough and so far the girls have done well and showed character.

“The West Indies is definitely going to bounce back, they’re not a nation that are going to go down lying. We just going to have to be prepared and make sure we cover all our bases in the next training session,” continued Lee.

“The team is in a very good place, the girls are in very good form and hopefully, we can show it in the next few games.”

The second ODI between the two teams is scheduled for Friday (16:00 SA time). 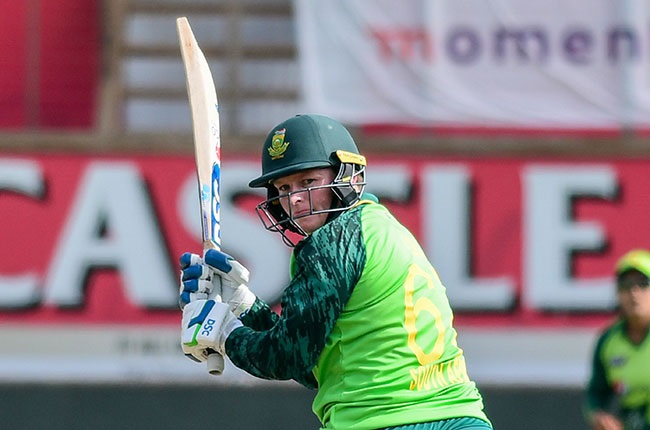