by vusi.bafetane
in Africa News
Reading Time: 3 mins read
A A
464
SHARES
1.8k
VIEWS
Share on FacebookShare on Twitter

JOHANNESBURG – South Africa’s governing ANC, riven by corruption and tarnished by its failure to redress poverty and inequality, will on Monday unveil its manifesto for upcoming local elections hoping to woo back supporters and stop opposition inroads.

The party of Nelson Mandela is the last of the major parties to do so, following the main opposition Democratic Alliance (DA) and the leftist Economic Freedom Fighters (EFF).

But the ANC’s campaign has been in full swing for the past two weeks, with  President Cyril Ramaphosa leading party officials crisscrossing impoverished townships and villages.

On Sunday, a smiling Ramaphosa went door to door in eastern Johannesburg, sat next to potential voters, patting them on the shoulder, and picked up a young boy sporting an oversized yellow campaign T-shirt.

On Sunday evening, hoping to rebrand the ANC to appeal to youths, Ramaphosa boasted that a quarter of the ANC’s 10,000 candidates were young people.

“Our hopes are pinned on this group of young people we have deployed,” he said at an event in Johannesburg.

“It is these candidates, once elected, who will be our builders, to correct the mistakes of the past… to build strong municipalities that involve and serve all residents,” Ramaphosa said.

The party which has governed South Africa since the end of apartheid in 1994 suffered its worst electoral setback during the last local polls in 2016, eking out just under 54 percent nationally while losing an absolute majority in five of the six largest cities, including Johannesburg and Pretoria.

Its main rival the DA, which is still struggling to shake off its image as a predominantly white party, launched its manifesto online because of COVID-19 restrictions.

The ANC ‘are looting’

DA leader John Steenhuisen said the party was fielding a candidate in every ward in the country for the first time in history.

“The DA governs less than 10 percent of South Africa’s municipalities, but the top five performing municipalities are all DA-run,” he bragged.

“You may ask yourself: Why? What is it about these towns and cities that make them work when neighbouring municipalities are imploding?” he said, touting the party’s slogan of “local government that works”.

The radical leftist EFF unveiled its manifesto at a Sunday rally where little heed was paid to Covid social distancing protocols, which have been largely relaxed though outdoor gatherings are still limited to 500 people.

Thousands of supporters dressed in the EFF’s red and black converged at a square in rundown central Johannesburg.

Among them was white-bearded Tebugo Maboka, 66, one of the few elderly supporters at the rally.

He ditched the ANC for the EFF, saying the ruling party had lost the plot, with its leaders only taking care of themselves “instead of the people”.

“All these years, ANC is more about destruction than development of our economy. They are looting. They only think of benefitting themselves. We empowered them by giving our vote but they don’t deliver on their promises,” he told AFP.

On the podium, EFF leader Julius Malema, 40, slammed the “white capitalists who captured and continue to control” ANC leaders.

Analysts say the ANC will struggle to regain its lost voter base during the November 1 elections because of deep-rooted internal conflict, general disarray and gross mismanagement of some of the municipalities it controls.

“When the ANC has lost votes in the local government, it was because of divisions in the ANC, not necessarily because of the strength of the opposition parties,” Sandile Swana, an independent political analyst. 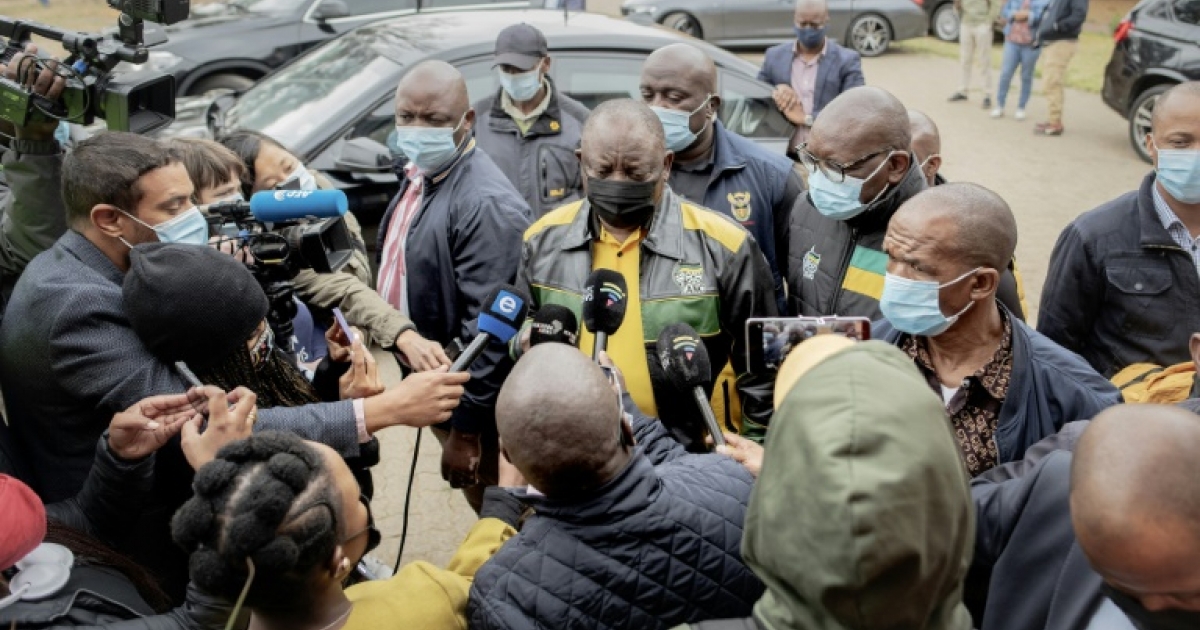