by lloyd paris
in Africa News
Reading Time: 3 mins read
A A
465
SHARES
1.8k
VIEWS
Share on FacebookShare on Twitter

Washington, DC — After months of delay, the U.S. Senate on Tuesday night confirmed Mary Catherine Phee for the top Africa policy post in the State Department by a vote of 67 to 31. When sworn in as Assistant Secretary of State for African Affairs, she will succeed Ambassador Bob Godec, who has headed the Africa Bureau since the departure on Inauguration Day in January of Tibor Nagy.

Phee, whose nomination was announced by the White House  on April 15 and approved on August 4 by the Senate Foreign Relations Committee, is a career diplomat who speaks Arabic. She has carried out sensitive assignments on Afghanistan and Iraq and has served in Kuwait, Egypt and Jordan. She spent three years in Ethiopia as Deputy Chief of Mission, the number two post in the embassy.

Phee was one of about a dozen nominations for top foreign policy posts to win Senate approval in recent days. Some 80 State Department nominations have been blocked by Texas Republican Ted Cruz, who has used a parliamentary rule to delay nomination votes, as a protest against President Biden’s refusal to impose sanctions on a nearly complete pipeline that will transport natural gas from Russia to the European Union.

Because of the objections raised by Cruz, each nomination now requires a separate Senate vote called ‘cloture’ to end any debate and open the way to a rollcall for approval, a time-consuming process in a crowded Senate calendar. Until recently, the Senate had confirmed only a few top-echelon State Department officials – Secretary Tony Blinken in late January, two Deputy Secretaries in March and April, and four Undersecretaries in July and August.

In addition to Phee, the Senate has now approved nominations by roll call votes for several other State Department regional bureau heads – Europe and Eurasia, East Asia, South and Central Asia, and Western Hemisphere. In addition, assistant secretaries have been confirmed to head the Bureaus of Consular Affairs and Diplomatic Security, Oceans and International Environmental and Scientific Affairs, International Narcotics and Law Enforcement Affairs and Political-Military Affairs.

Of the 61 appointments Biden has made to fill ambassadorial posts, only two have been confirmed – Linda Thomas-Greenfield, who won Senate approval in February for her Cabinet-level position, and Ken Salazar, a former Senator and Secretary of Interior who was confirmed in August as Ambassador to Mexico.

But further Senate action was blocked not by Cruz but by Republican Senator Josh Hawley from Missouri, who has pledged to oppose “every single civilian nominee” for State and Defense Department posts until Secretary of State Blinken and Secretary of Defense Lloyd Austin resign for their roles in managing the American departure from Afghanistan. Addressing the Senate, Menendez denounced the Republican opposition to confirmation of foreign policy nominees as “incredibly irresponsible”.

The Foreign Relations Committee held hearings today on four more ambassadorial nominees, including Cindy McCain to the United Nations Food and Agricultural Organization in Rome, former Senator Jeff Flake to Turkey, former Delaware Governor Jack Markell to the Organization for Economic Cooperation and Development in Paris and Mark Gitenstein, a former senior Biden aide in the Senate, who served as Obama’s ambassador to Rumania, as ambassador to the European Union.

In another key Africa-related nomination, the White House on Monday announced the selection of  John N. Nkengasong to be Ambassador-at-Large and Coordinator of United States Government Activities to Combat HIV/AIDS Globally. Nkengasong, who is currently Director of the Africa Centres for Disease Control and Prevention in Addis Ababa, will oversee the U.S. President’s Emergency Plan for AIDS Relief (PEPFAR), a large-scale initiative launched during the George W. Bush administration. 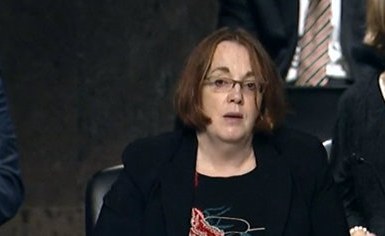