by one-drum foundation
in Africa News
Reading Time: 3 mins read
A A
465
SHARES
1.8k
VIEWS
Share on FacebookShare on Twitter

Abass Dodoo and One-Drum Foundation bring you a Festival of Highlife. Discover ancient African drumming rhythms infused with Jazz and Afrobeat in memory of the legendary Ginger Baker and music from Ginger Baker’s Jazz Confusion. Sit back and enjoy the creativity and artistry of next-generation Master African Drummers and young musicians influenced by Ginger Baker’s afro-jazz polyrhythmic innovation. Join Abass and Friends of Ginger Baker, as they celebrate his love of African drumming and the Highlife.

On 7th October 2021, at Hackney Empire, Abass Dodoo and Kudzai Baker launch Ginger’s charity with a show at Hackney Empire in honour of Ginger Baker and his love of African drumming rhythms. Joining Abass on stage will be various guests who have collaborated with Ginger in previous years. The performance is a celebration of a rich tapestry of musical talent representing Ginger Baker’s love of musical diversity and inclusivity.  Also on stage will be the children and young people who have attended the many grant-funded One-Drum Foundation projects and workshops showcasing their talent and creativity, inspired by Ginger Baker and Abass Dodoo’s teaching, including collaboration with Grand Union Youth Orchestra led by Joshua Brandler in conjunction with Creative Director Tony Haynes, and the East London Young Cellists led by Classical Concert Cellist Mika Agnieszka Maria.

Abass was born into a family of Royal Master Ghanaian Drummers whose existence was not only steeped in the traditions of Ghanaian music and dance, but also in the folklore of traditional medicines. He developed his craft under the instruction of his uncle, the legendary Mustapha Tettey Addy, Master drummer, anthropologist and researcher in the field of traditional music and dance, and whose drumming rhythms included in the British GCSE Music syllabus, text and World Music curriculum. With his uncle, Abass toured extensively on the WOMAD circuit of festivals working with many artists developing his own style and signature of African drumming; he is also nephew to Master Drummers Yacub Addy, Obo Addy and J.C. Commodore, who performed with Ginger Baker on the album African Force.

In 2012, Abass had an opportunity to collaborate with the musical director of the Royal Shakespeare Company production by Gregory Duran, with an entirely black cast of Julius Caesar depicting an exciting African interpretation of a classic story.

Abass also collaborated with Van Morrison on his album called ‘ Van Morrison Duets: Re-working the Catalogue’ and has subsequently been involved in many innovative and exciting performances, recordings, TV appearances and educational projects.

Between 2007 – 2019 Abass worked with the Cream drummer Ginger Baker touring Jazz venues and festivals around the globe with the Ginger Baker Jazz Confusion, a quartet comprising bassist Alec Dankworth and saxophonist Pee Wee Ellis performing tracks from the album Why?.

In 2019 Abass Dodoo established the One-Drum Foundation (Reg Charity.1185202) with its patron, Ginger Baker, shortly before Ginger passed away on the 6th October 2019. The charity’s purpose is to advance the education of the public in the arts, history and culture of African music through educational workshops and performances. The One-Drum Foundations’ flagship project is all about establishing free African drumming workshops and performance opportunities to the vulnerable young generation at risk of involvement in gangs and knife crime. This teaching is supported by the Arts Council.

Press release distributed by Pressat on behalf of One-Drum Foundation, on Friday 10 September, 2021. For more information subscribe and follow https://pressat.co.uk/ 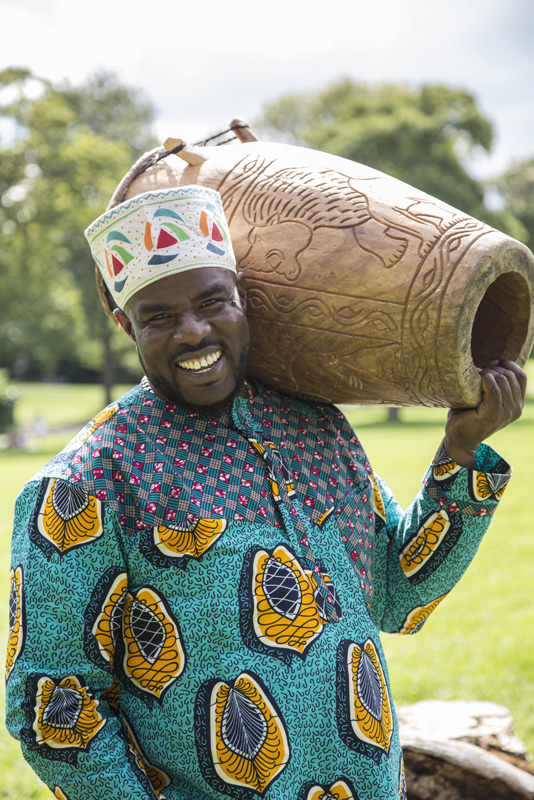