by sharie geddes
in COVID-19
Reading Time: 6 mins read
A A
465
SHARES
1.8k
VIEWS
Share on FacebookShare on Twitter

TORONTO —
It’s likely that the highly contagious Delta variant of the novel coronavirus will force schools to close this year and it can happen very quickly, according to some officials.

The Canadian Medical Association (CMA) and the Canadian Teachers Federation (CTF) are concerned that the rising number of COVID-19 cases and the lack of clear guidance on pandemic protocols in schools will spell trouble ahead.

“Schools may be an area where we could see large outbreaks of the Delta variant because there are so many people that are vulnerable to being infected,” CMA president Dr. Katharine Smart told CTVNews.ca in an interview from Whitehorse on Friday.

And if that happens, schools will have to shut, she said.

The Delta variant, which is now the predominant strain across Canada, is two- to three-times more contagious than the original variant of the novel coronavirus.

“If introduced in an environment where a lot of people are susceptible to it, it can spread very rapidly,” said Smart, whose organization represents more than 75,000 doctors.

CTF president Sean Hammond, whose group represents about 300,000 teachers across the country, agreed that the Delta variant makes the threat of contagion much worse for the upcoming school year.

“When you look at the rising numbers and the drastic increases, it’s concerning if the governments across this country don’t have precautions in place,” Hammond said in an interview from Ottawa on Aug. 18.

“There’s no question we’ll have to deal with the prospect of schools closing,” he said, adding that every precaution should be taken to ensure safety now.

However, schools, districts, provinces and territories are all taking different approaches. And while vaccinations have proven to be helpful in the fight against the pandemic, only some provinces such as Ontario, Manitoba and Saskatchewan have teachers calling for vaccine mandates in their profession.

Smart agreed that wearing masks, small class sizes and distancing are all good measures for schools to take in order to keep everyone safe.

However, there are no consistent measures across the country. Some provinces like Ontario are requiring students from Grades 1 to 12 to wear masks indoors. Manitoba also recently said it will reintroduce a mandatory mask mandate in schools. And some provinces, like Alberta, have no mask mandate at all.

It’s a similar patchwork situation with the other measures. For example, Ontario elementary schools will have physical distancing, but in Newfoundland and Labrador people in schools will be encouraged to distance in low-risk situations and required to do it in high-risk scenarios.

Likewise, class sizes vary. The key is how big classrooms are and if the people in them can distance. Smart also noted that keeping the same children together throughout the day is better than having them mix with others.

“Given the lack of real plans now with comprehensive safety measures I think it’s unavoidable that we’ll be in a situation where schools will need to close,” Hammond said.

“Back in March 2020, within 24 to 48 hours, the world changed,” he said. “Everything was shut down. Schools were shut down and stayed that way for some time.

“That’s why it’s so concerning when provincial and territorial governments are not putting in the funds required and taking steps to ensure that when teachers and students are back in schools across the country they are as safe as can be, without any questions.”

Smart, who works as a pediatrician, agreed and said there haven’t been clear recommendations from provincial, territorial or local public health authorities.

“I think if you’re starting to see spread within or beyond a classroom that’s not contained, they’re going to have to look at closing that school for a period of time,” Smart said.

Both Hammond and Smart are alarmed at the rapid spread of the variant in schools in the United States.

About 204,000 children in the U.S. tested positive for COVID-19 in the week ending Aug. 26, the American Academy of Pediatrics reported. The number of cases in children has risen five-fold since the week ending July 22, when 38,000 cases were diagnosed.

“Look what’s happening in the southern U.S., it’s an absolute disaster,” Smart said. “Their ICUs are full of dying children with COVID-19 because they let COVID run completely out of control.

“I really do hope that’s not our situation because we do have much higher vaccination rates,” Smart said. “But if Delta starts running through our pediatric population we will start to see issues – because if a lot of kids get infected there will be children who are incredibly ill. That’s just a numbers game.

“So the point is, let’s keep those numbers as low as we can,” Smart said, adding that the country needs to have a vaccination rate of between 90 and 95 per cent to combat community spread.

Right now about 66.7 per cent of Canada’s 38.1 million people are fully vaccinated.

“There really is no reason for people not to get the vaccine,” Smart said, adding that medical exemptions are incredibly rare. “The fact that people are choosing not to is putting children at risk.”

There are about six million children under the age of 12 in Canada who are at a greater risk of catching COVID-19 because they’re not yet eligible to be vaccinated.

And vaccination rates for children between the ages of 12 and 17 range between 66 per cent and 75 per cent across the country, Smart said. That means up to one-third or a quarter of children in classes of this cohort likely won’t be vaccinated when the new school year starts for most students in September.

In addition, Smart pointed out that Alberta and Saskatchewan are seeing more and more cases of COVID-19, they have the lowest rates of vaccinated children between the ages of 12 and 17, and they don’t even have mask mandates.

She also noted that Pfizer vaccination data for children under the age of 12 is expected in September, and if approved for use could lead to a vaccine roll-out for young people in the next few months.

“Why are we not seeing political leadership?” she asked, referring to the variety of measures that could be taken to ensure a safe return to school. “Particularly when you think about the fact that we’re only a few months away from that [vaccinations for young children]. Why roll the dice right now at this point in the pandemic?

“It’s probably better to start out the year doing more and if things are going well, we can start backing down, but what we’re seeing is the opposite approach,” she said, noting some people seem to think the pandemic is over. “Unfortunately, that’s just not true. We’re clearly in a fourth wave.”

And rather than waiting for school closures, precautions should be set in place now, said Smart, who has a vaccinated 12-year-old daughter and a 10-year-old son, both of whom will be back at school.

“I really feel for parents,” Smart said. “I think it’s a scary time.

“You can never eliminate all the risks in your child’s life,” she said, but a lot can be done to try and make the return to school safe.

Improving the vaccination rate is really important, she said, adding that she thinks people who aren’t vaccinated should not be able to do non-essential activities like going to restaurants or gyms.

She also said every classroom should have proper ventilation, everyone should be wearing masks and keeping their distance.

“There are many things we could be doing, that we’re not doing and that would dramatically improve the situation,” she said.

This story has been corrected to include more up-to-date information on mask mandates in Manitoba. 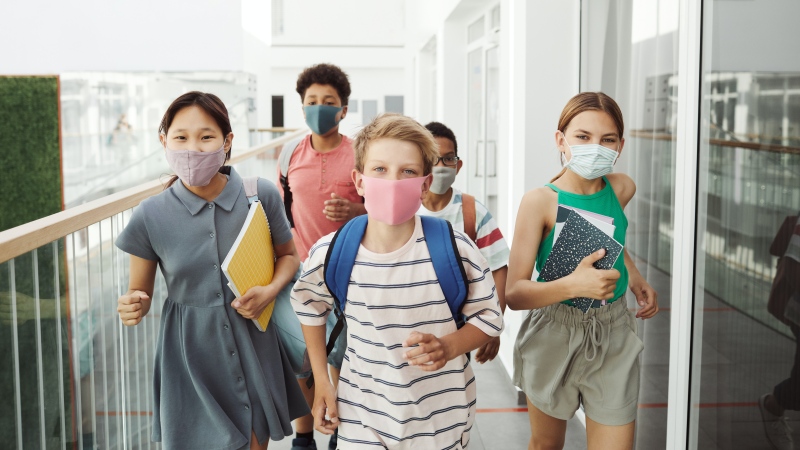 ‘Top Gun: Maverick’ flies to 2022 due to coronavirus surge