The Traitor Robert E. Lee Finally Gets His Just Deserts

by casey michel
in Africa News
Reading Time: 5 mins read
A A
469
SHARES
1.8k
VIEWS
Share on FacebookShare on Twitter

Last
Thursday, the Virginia Supreme Court ruled that a statue honoring one of the
greatest traitors the United States has ever produced can, at long last, come down. The state of Virginia may now begin to disassemble the behemoth sculpture honoring
Confederate Gen. Robert E. Lee that resides on the city’s fabled Monument
Avenue, on which statuary to Confederate luminaries (and much later, after
considerable discord, homegrown Black tennis superstar Arthur Ashe) has long
stood. While the timeline for the ultimate removal is yet to be determined, as
Governor Ralph Northam said upon the announcement
of the court’s ruling: “Today it is clear—the largest Confederate monument in
the South is coming down.”

The
impending removal of Lee’s statue is hardly a panacea for ongoing racial strife
in the U.S., not least after the past few years of a president who fractured
race relations in unprecedented ways. It is, however, a chance to dismantle the
hagiography surrounding a man who commanded troops to slaughter tens of
thousands of American soldiers, all in pursuit of shattering the U.S. while
expanding the enslavement of millions of Americans. It is a chance finally to place Lee among the pantheon of our nation’s most malignant enemies.

The
Richmond statue to Lee—clocking in at six stories high and some 12 tons
in weight—isn’t simply the most prominent piece of Confederate remembrance
still standing in the U.S. When it was initially erected in 1890, in
front of over a hundred thousand onlookers, it represented a clear turn in the
burgeoning growth of Lost Cause mythologizing. As historian David Blight writes
in Race and Reunion, “More than ghosts
emerged from the Richmond unveiling of 1890; a new, more dynamic Lost Cause was
thrown into bold relief as well.”

With
the unveiling of Lee’s statue, mewling protests about Northern aggression had
given way to muscular Confederate memorialization—with national
reconciliation, added Blight, now “dependent upon the dead leader of the cause
that lost.” Gone were the days of faction and friction among white Americans,
replaced by a white supremacist comity and Jim Crow regime built under the
shadow of Lee’s new statue—a state of affairs that would last decades,
entrenching an American apartheid of which Lee would have heartily approved.

It’s
not as if Lee’s rank treason is any kind of secret. Lee may not have been as histrionic as some of the human
enslavers leading state governments into the Confederacy, or as colorful as some of the other
former American military officials who elected to lead the Confederacy’s white
supremacist insurrection. In many ways, that distance remains part of Lee’s
ongoing appeal. Bathed in alleged honor, clad in supposed chivalry, Lee, for
decades, has stood as a man more sinned against than sinning—a supposed titan of
gentlemanly warfare swept against his will into the tempest of his times; the
avatar of a willingness to stand in defense of one’s principles, however
blinkered (and treasonous) they may be. As W.E.B. Du Bois once wrote, “It is the punishment
of the South that its Robert Lees … will always be tall, handsome and well-born.
That their courage will be physical and not moral.”

Du
Bois is precisely correct. Rather than joining the hundreds of thousands
of white Americans across the South who remained loyal to the U.S. during the
Confederacy’s short-lived fratricide, Lee elected to join a traitorous band of
effete, elite white Southerners bent on imploding the U.S., carving out new slavery
territories
across the American West and expanding chattel slavery as far as they could.

The
Confederacy, as American general (and future president) Ulysses S. Grant would later write, was “one of the worst
[causes] for which a people ever fought, and one for which there was the least
excuse.” It was a movement that sought, as historian Stephanie McCurry wrote, to build “something
entirely new in the history of nations: a modern proslavery and anti-democratic
state, dedicated to the proposition that all men were not created equal.” It
was one that was willing to decimate and destroy as many loyal Americans as it
needed to get there. And it was one that Lee joined with enthusiasm—all for, The
New York Times noted, “the protection of
slavery.”

Lee,
like the Confederates he freely joined, viewed the maintenance of white
supremacy
as his central tenet and as the primary reason he spent years helping cause
the deaths of innumerable American troops. Prior to the war, Lee had no problem
bloodying the Black Americans he owned, nor in shattering the families he
personally enslaved, with one historian noting that by 1860, Lee “had
broken up every family but one on the estate.” During the war, Lee’s white
supremacy turned darker yet, with his troops abducting and enslaving Black
Americans and massacring Black American troops attempting to surrender.

He
spent the latter years of his life stupendously failing to earn redemption. After
the war, Lee hardly aided in the kind of racial reconciliation pursued by the
Lincoln or Grant administrations. While bands of white supremacist terrorists
ransacked Reconstruction-era governments, obliterating efforts to create a
multiracial democracy, Lee sat on his hands. He joined a large swath of
Confederate leaders after the war who, as historian Elizabeth Samet writes, did “little to further the postwar
settlement. In many cases, they worked to undermine the government’s policies,
especially with regard to African-Americans.” Added author Clint
Smith,
Lee “did not become open to the creation of a society based on racial equity;
he actively opposed it. He argued, for example, that Black people should not
have the right to vote.”

Disavowing
his oath of loyalty to the U.S., leading a movement to carve up the nation while
extinguishing the lives of hundreds of thousands of American soldiers, in the
hopes that he and his compatriots could throw off their American citizenship
and continue enslaving millions of Black Americans: Lee belongs firmly among
the highest ranks of American quislings, mentioned in the same breath as those
like Benedict Arnold. For all who can see him clearly, Lee’s treason shines
brightly, a century and a half after he led insurrectionists bent on
disintegrating this country.

Thousands
of Confederate memorials remain scattered like a pox across this country,
honoring the most anti-American movement the U.S. has yet seen. (Imagine if,
say, London constructed hundreds of statues to George Washington, or Mexico
created hundreds of monuments honoring Sam Houston.) It wasn’t until 2021 that
an American president finally and accurately described the Confederate flag
as a “symbol of hate.” But the removal of the statue in Richmond is both a
capstone to the anti-Confederacy movement that’s begun rippling across
the country
in recent years and a sign of a tide finally, decades after it should have,
beginning to turn.

Not
all Americans are there yet, of course; some still refuse to see Lee for the rank
traitor he was, claiming such framing is a fleeting
fad of the times. They couldn’t be more wrong. “There are but two parties now,
Traitors and Patriots and I want hereafter to be ranked with the latter,” Grant
wrote about the movement Lee
led. Immediately after the war, a federal grand jury specifically indicted Lee for treason—he only avoided
charges when Grant interceded, claiming such charges
would abrogate the surrender agreement at Appomattox. The only reason Lee never
faced treason charges he rightfully feared was thanks to the man who’d bested him
on the battlefield—the man who remained loyal to his country and who put
paid to the idea that Lee, as his supporters still believe, was some kind of
military genius.

Such
a move kept Lee from the gallows, and from American ignominy, for far
longer than he deserved. But with the bulldozing of Lee’s statue in Richmond,
we can finally dismantle the myth cloaking one of the greatest enemies the U.S.
has ever seen—and finally see Lee as the traitor he’s always been. 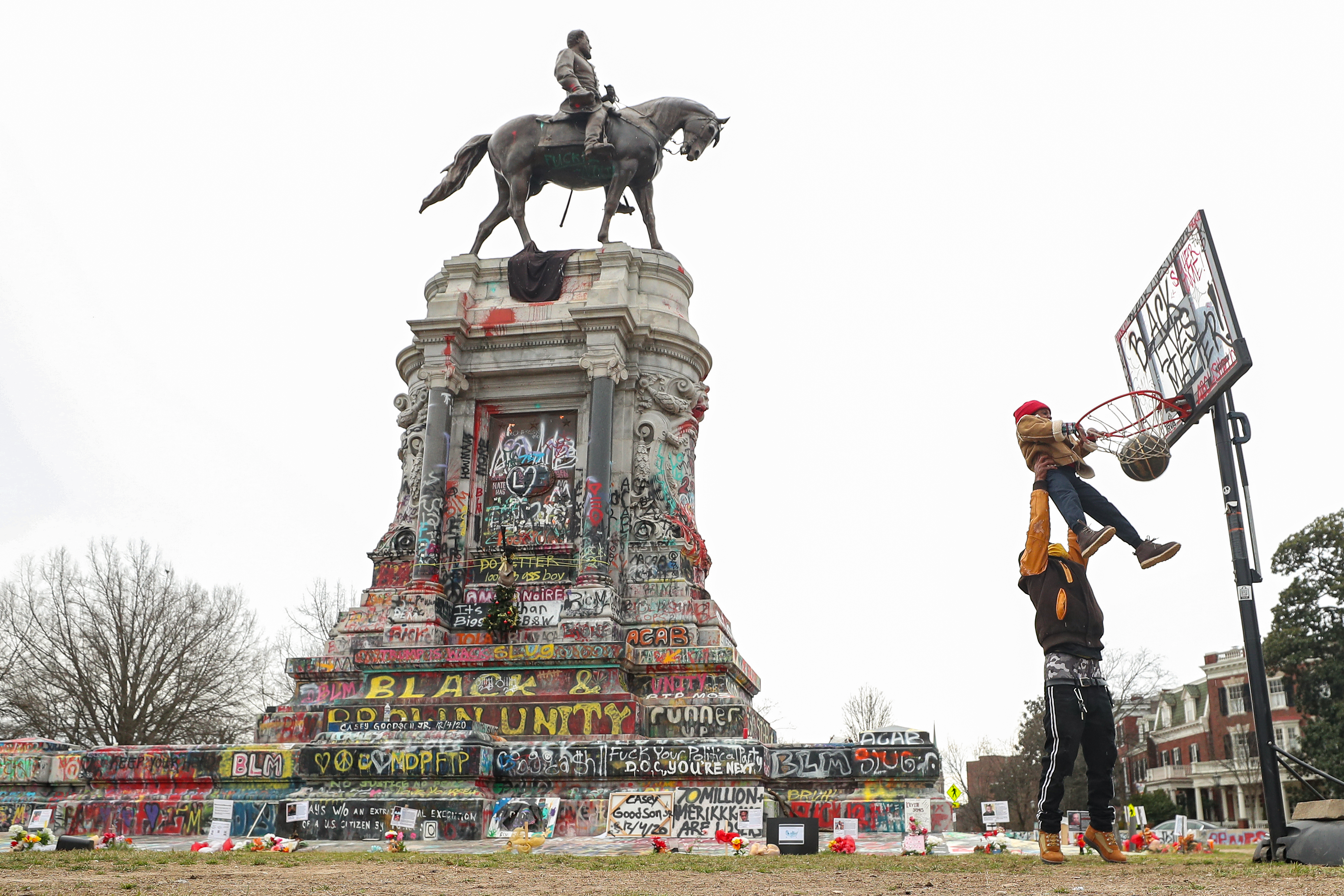