by Rebecka Redner
in COVID-19
Reading Time: 5 mins read
A A
465
SHARES
1.8k
VIEWS
Share on FacebookShare on Twitter 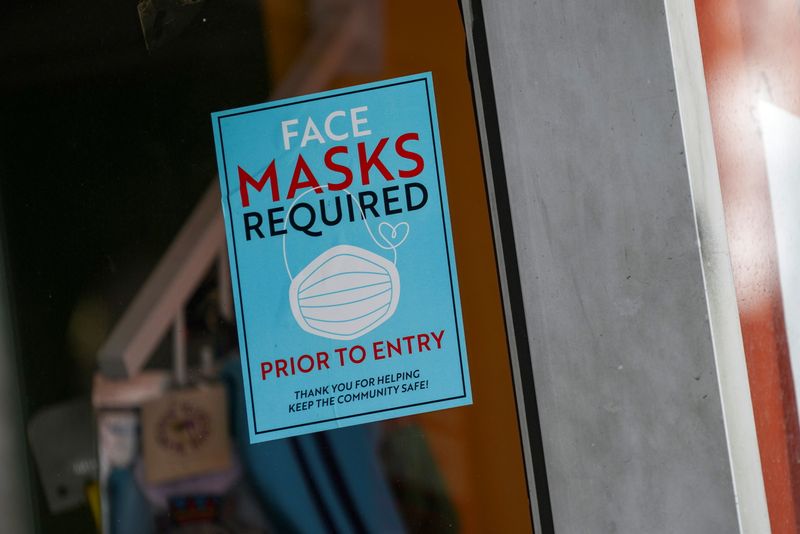 © Reuters. FILE PHOTO: A sign at the entry to a beauty salon informs of mask requirement due to the coronavirus disease (COVID-19) measures in the Bronx borough of New York City, U.S., July 27, 2021. REUTERS/David ‘Dee’ Delgado

WASHINGTON (Reuters) – The resurgence of the COVID-19 pandemic dealt its most visible blow yet as Federal Reserve officials abruptly cancelled their premier in-person conference, raising questions about their insistence the economy faces limited risk from the Delta strain and plans to dial back crisis-era support.

The setback, announced late Friday, with the annual Jackson Hole, Wyoming, symposium now virtual for the second straight year, is the latest in a series of small but accumulating signs the new surge is having more of an impact than Fed officials anticipated. Chair Jerome Powell was already scheduled to deliver his keynote speech on Friday by webcast.

It comes at a critical time as the U.S. central bank considers when to start shrinking its extraordinary support for the economy. Most policymakers had been keen to begin reducing the Fed’s asset-purchase program by the end of this year, according to the minutes of the July 27-28 policy meeting.

Until now, Powell has downplayed the impact of Delta. People and businesses had learned to “live their lives, despite COVID,” he said, indicating the central bank’s outlook for an improving economy remained intact despite the resurgence in cases and uneven vaccination rates.

“People and businesses have improvised and learned to adapt,” Powell said in an Aug. 17 webcast event with teachers and students. U.S. economic growth surpassed pre-pandemic levels in the second quarter and is likely to be revised higher later this week.

That confidence could now be mislaid with the quickly evolving situation causing a dashboard of indicators to flash some potential warning signs.

Nearly all of the recovery measures for individual U.S. states tracked by Oxford Economics fell for the latest week available. States in the South saw the sharpest drops, led by Louisiana, Florida, and Mississippi.

COVID-19 deaths in the United States reached a five-month high last week as the more contagious Delta variant runs rampant in areas with low vaccination rates. Cases continue to rise and the United States, as of Friday, was averaging about 139,000 new infections each day.

Small business hiring tracked by time management company Homebase has edged down, while Bank of America (NYSE:) credit and debit card data showed a decline in spending on leisure in the last seven days. Restaurant bookings through OpenTable have also fallen in recent days.

U.S. consumer sentiment also dropped sharply in early August, hitting its lowest level in a decade, with more negative outlooks on everything from personal finances to inflation and employment, a University of Michigan survey showed.

“We have made all the easy wins of reopening, and the plain fact is the virus is catching up with us. So there is some cooling … economists got a little over-enthusiastic,” said Vincent Reinhart, a former Fed staffer who is chief economist at BNY Mellon (NYSE:) Asset Management.

On Wednesday, Goldman Sachs (NYSE:) economists lowered their forecast for third-quarter economic growth to 5.5% from 9%, citing the Delta variant’s prolonged impact, although they revised up their estimates for the fourth quarter and most of next year.

Others caution not to read too much into the softening after a surge in economic activity amid the reopening and pent-up demand being released over the summer. “So far, real-world impacts have been relatively small and localized,” said Jefferies (NYSE:) in its analysis of real-time data, noting declines in restaurant bookings had been led by states with large COVID-19 outbreaks, such as Florida and Texas.

There does, however, appear to be a growing crisis of confidence among some major employers, many of whose offices have been half-empty for more than 18 months. On Thursday, Apple Inc (NASDAQ:) delayed the return to its corporate offices to January at the earliest.

Dallas Fed President Robert Kaplan, one of the central bank’s most forceful supporters for reducing support for the economy, said on Friday the impact of the Delta variant was “unfolding rapidly” and that he may adjust his views on monetary policy “somewhat” should it slow economic growth materially. Kaplan has previously said he would like the Fed to begin tapering its asset purchases in October.

Fed policymakers are also keenly watching the handful of categories that have contributed to an outsized jump in inflation due to supply-chain bottlenecks, as well as any signs price pressures may be broadening.

Many at the Fed, including Powell, maintain that current high inflation readings are temporary and will ebb back towards the central bank’s 2% average goal, but some policymakers are growing more anxious.

U.S. consumer price increases slowed in July even as they remained at a 13-year high on an annual basis, and there were tentative signs inflation has peaked. The surge fueled by the Delta variant is pressuring that premise.

China’s ‘zero tolerance’ COVID-19 policy saw a terminal at its second-largest container port by handling volume temporarily shut down last week due to an outbreak, and several other Chinese ports faced further congestion as vessels were diverted and cargo processing slowed due to stricter disinfection measures.

Leading international shipping groups warned clients of delays and route adjustments as global supply chains came under further strain, which could keep price pressures elevated in the United States for a range of parts and goods.

The months-long shortage of global semiconductors that has pushed up prices of new and used vehicles shows no signs of abating as the Delta variant spreads across Asian countries that are home to auto factories and chip plants.

Toyota, the world’s largest automaker by sales volumes, said on Thursday it would slash its planned global production for September by 40%, a move that impacts most of its North American factories.

Should U.S. supply issues, including a shortage of labor, persist even as vaccinations, boosters, better treatments and healthy savings keep demand from cratering, the chances of a blunder by the Fed goes up if it is forced to quickly raise interest rates to keep a lid on inflation, said Diane Swonk, chief economist at Grant Thornton.

“What many once hoped would be a sprint has become a marathon of a pandemic with the finish line a mirage,” Swonk said. “The risk of a policy misstep and a premature end to this business cycle is rising.”

Frustration boiled over as traffic management staff at the Avondale testing centre threatened to call the police on people angry...

Covid 19 coronavirus: What happened after the UK dropped all restrictions

Boris Johnson holds a virtual Freedom Day press conference from self-isolation. Video / 10 Downing Street It has been a...