by Rebecka Paris
in Africa News
Reading Time: 3 mins read
A A
465
SHARES
1.8k
VIEWS
Share on FacebookShare on Twitter

TAIPEI: A senior US senator, also a member of US Senate Select Committee on Intelligence, on his social media revealed that the United States has 30,000 soldiers stationed in various Taiwan islands.

If the tweet is correct, it is a military invasion and occupation of China’s Taiwan and equivalent to the US declaring war on China. China could immediately activate its Anti-Secession Law to destroy and expel US troops in Taiwan and reunify Taiwan militarily, some experts noted.

Some others believe the news leaked by the US senator cannot be true because 30,000 is not some small amount that the US Army could hide and not be noticed on the island and the United States has nothing to gain by stationing the US Army on the island. Sacrificing its own interests to satisfy Taiwan separatists also does not fit with US foreign policy, just like the US did in Afghanistan.

His tweet raised a wave of doubts among netizens with many commenting below his tweet: “how come the US still has troops in Taiwan,” “so the US army has a secret division in Taiwan,” “Cornyn must have mistaken the number” and “this should have been before 1979.”

Cornyn did not immediately delete his tweet or make any corrections after he posted it on early Tuesday. He deleted the tweet until later his tweet ignited wide controversy and media attention. Neither the senator nor the US government made any comments over the tweet.

The Taiwan island “defense department” made a low-key denial on Tuesday, saying it is wrong and it would not comment on it, Taiwan-based media outlet SETN.com reported.

As a senior senator from Texas, who was once a Republican Senate Majority Whip for the 114th and 115th Congresses, and now a member of US Senate Select Committee on Intelligence, Cornyn should be aware of the US government’s military intelligence.

Li Haidong, a professor at the Institute of International Relations of the China Foreign Affairs University, told the Global Times on Tuesday that such ridiculous and shocking news is more likely the result from the old age of the senator that makes him a dotard or his confusion about the data with previous data in the 1970s or 1960s.

But we have to acknowledge that there are also some US senators fabricating data to boost their political careers. Whether it is a mistake or hype, we could see the US politician has a lack of political sensitivity and is irresponsible in making public remarks, which is jaw-dropping, Li said.

“I would choose not to believe this is the real case,” Song Zhongping, a Chinese military expert and TV commentator, told the Global Times on Tuesday.

He said the US cannot conceal 30,000 soldiers plus their equipment on the island. US would not dare or take such a risk to do so. But we cannot rule out the possibility that the US would dispatch such an amount of troops when a military conflict breaks out in the Taiwan Straits.

If the United States and China went to war because US brazenly stationed troops on the island of Taiwan, whether 30,000 or 1,000, the price cannot be paid off for the US and the US clearly understands it. It is impossible for the US to be silly enough to sacrifice itself to satisfy Taiwan separatists, Li noted.

Foreign policies of the US clearly demonstrate that the US would rather sacrifice its allies to satisfy its own demands and interests as it has never been the opposite and the scenarios in Afghanistan, Vietnam, Iraq and Syria are the evidence, the expert explained. 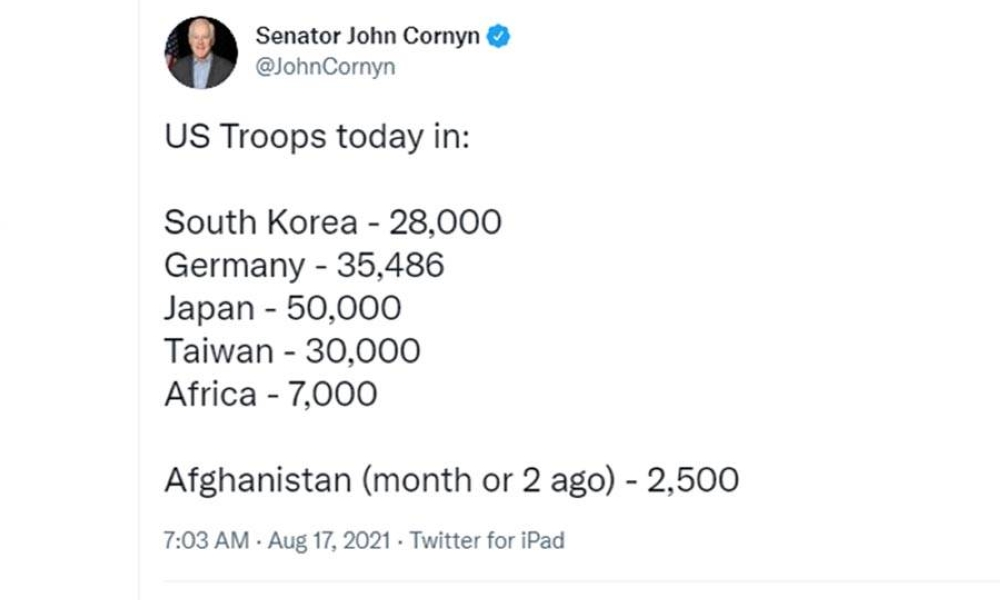