by BGC Senegal
in COVID-19
Reading Time: 1 min read
A A
465
SHARES
1.8k
VIEWS
Share on FacebookShare on Twitter

Milkha Singh, a four-time Asian Games gold medalist, died on Friday at the Post Graduate Institute of Medical Education and Research (PGIMER) hospital at the age of 91, after fighting Covid infection for a months .

“It is with extreme sadness that we would like to inform you that Milkha Singh Ji passed away at 11.30 pm. on the 18th of June 2021,” his family announced in a statement.

“He fought hard but God has his ways and it was perhaps true love and companionship that both our mother Nirmal ji and now Dad have passed away in a matter of 5 days,” the statement further added.

Singh, also known as “the Flying Sikh,” won four Asian gold medals and finished fourth in the 1960 Rome Olympics 400m final. His story was adapted into the Bollywood film ‘Bhaag Milkha Bhaag’ which translates to ‘Run Milkha Run’, which was released in 2013. Singh’s wife, Nirmal Kaur, a former volleyball captain, died earlier this week at the age of 85, along with Covid.

The great man #MilkaSingh ji has left us in body, but the name Milkha will always live on as being synonymous with courage and will-power.
What a man. My sincere condolences to his family. Om Shanti ?? pic.twitter.com/AW2FbM3zg1 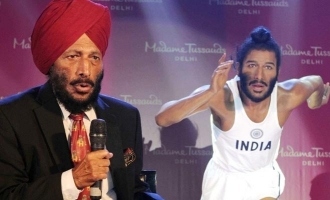