by Admin5
in Africa News
Reading Time: 3 mins read
A A
464
SHARES
1.8k
VIEWS
Share on FacebookShare on Twitter

President Hage Geingob yesterday during the country’s 31st Covid-19 public briefing on national response measures at State House said the looting and unrest in neighbouring South Africa (SA) should be a wake-up call for Namibia.

He said local oxygen supply is threatened after the past week’s turmoil, as supply chains between the two countries have come to a standstill.

“This is a wake-up call that we can at least start with when our business people start to produce,” the president said.

Geingob asked why the private sector and unemployed young people do not manufacture coffins.

Burials in Namibia have been postponed as the country is waiting for coffins to arrive from South Africa.

“We have to delay certain burials because the coffins are being manufactured or made in South Africa. Where are the business people? It is not the government,” Geingob said.

Minister of health and social services Kalumbi Shangula yesteray confirmed that the unrest in South Africa poses a threat to Namibia’s oxygen supply.

“The oxygen is being procured from South Africa and brought into Namibia by trucks. The current events in South Africa may pose a threat to the seamless supply of oxygen to Namibia,” he said.

Along with coffins and oxygen, the president said Namibian trucks with essential goods are currently stuck in South Africa as tensions increase between looters, community members and law-enforcement agencies, including the South African National Defence Force.

“We depend on them and have not tried to be independent from them. We are still getting basics, food stuff, like potatoes from South Africa. Small things we can produce ourselves. It is going to teach us that we ought to produce things ourselves,” Geingob said.

Despite the current situation, SA’s minister of international relations and cooperation, Naledi Pandor, assured Namibia that transport corridors would continue operating to deliver goods and services to Namibia – particularly those needed to fight Covid-19.

Geingob announced that no Namibian has been harmed during the unrest in KwaZulu-Natal and Gauteng.

However, one Namibian citizen in Durban has reached out to the Office of the President to ask for assistance to be repatriated to Cape Town, where there is no looting and unrest.

“One person who is in Durban wanted to leave and go to Cape Town. But we said it is better to stay put and see how the situation develops. If you are in the streets, it is more dangerous,” he said.

Namibian high commissioner Veiccoh Nghiwete in SA has sent out a notice to Namibians in the country, cautioning them to avoid hotspots.

“Avoid visiting all the dangerous areas where looting and other violent or criminal activities are taking place. Equally important, please take note that the third Covid-19 wave has reached an unprecedented stage and is claiming so many lives. When it is not absolutely necessary to go out, please stay home,” Nghiwete stated.

The Ministry of Health and Social Services is currently not testing for the presence of the Lambda virus variant, which was initially detected in Peru, or the Gamma variant detected in Brazil.

“We have now established that the Delta variant is in Khomas only. We are busy investigating how widespread it is in the country. We are not looking at Gamma and Lambda at the present moment,” Shangula said.

The minister said it is premature for the government to be concerned about a fourth wave as the country is still battling its third wave, driven by the Beta and Delta variants.

Meanwhile, it was announced yesterday that the current Covid-19 regulations will remain in place until 31 July.

“Over the past two weeks, 18 148 new cases were recorded, of which the Khomas region accounted for the highest share, with 20% of new cases in the country. The Erongo region recorded 15% of new infections, while the Otjozondjupa and Oshana regions recorded 9% of new infections each,” Geingob announced.

Shangula announced that 250 000 doses of Sinopharm will arrive tomorrow and will be distributed over the weekend, which means vaccination will resume countrywide on Monday.

In addition, the minister said a 20-ton bulk oxygen tank was installed at the Katutura Intermediate Hospital’s respiratory unit to provide oxygen to the 74-bed facility.

The existing bulk oxygen tanks at Tsumeb and Walvis Bay state hospitals, with a capacity of 6,5 tonnes each, will also be filled as required, he said.

“Afrox is installing a 13-tonne bulk oxygen tank at Oshakati State Hospital. A new gas-generating unit with a capacity of producing 370 litres of oxygen per minute was installed at the Windhoek Central Hospital. Some 300 portable oxygen cylinders were delivered in Windhoek,” he said. 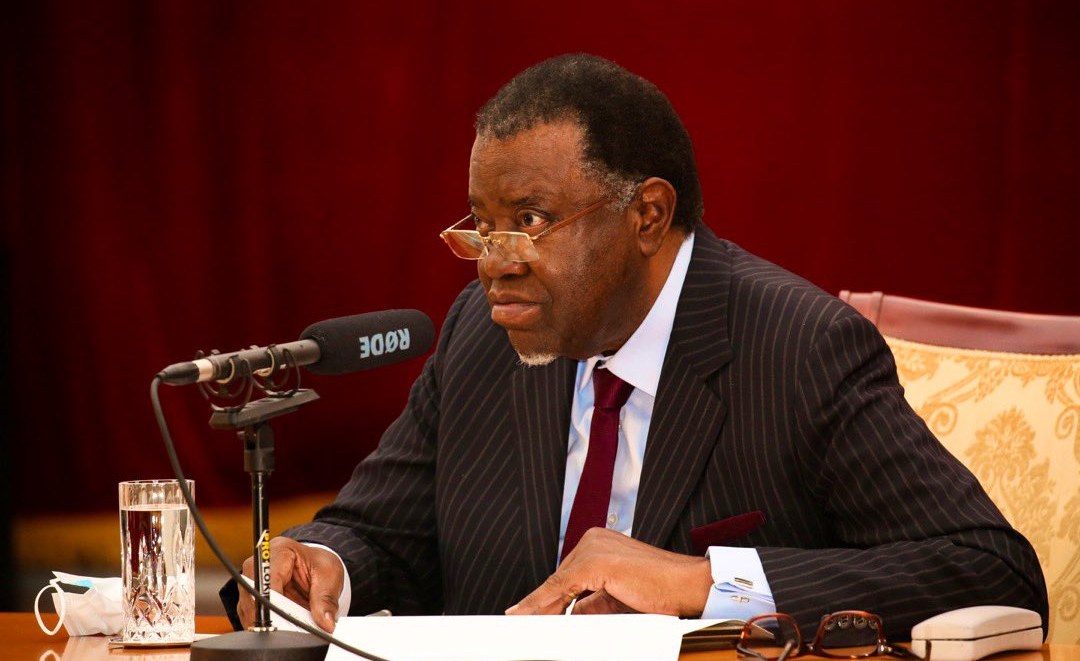