THE EMOTION THROUGH the anthem, the smiles, the glistening eyes. When the time finally came after all highs and lows, the ups and downs, and the long wait for a first-ever Olympic Games, the history-making Irish women’s hockey team were ready.

Their incredible attitude shone through early on in their Pool A opener against South Africa in Tokyo, Sean Dancer’s side showing they were really up for it with their dominant, assertive play.

While their opponents started strongly too and tested Ayeshia McFerran through the first quarter, Ireland looked much sharper and were good value for their 1-0 lead when Róisín Upton slotted home her 17th international strike with nine minutes on the clock.

The Limerick woman’s successful effort came off the back of a penalty corner, her low drag into the bottom corner after good work from Deirdre Duke earning the 2018 World Cup silver medallists a crucial breakthrough.

It was perhaps fitting that Upton would become the first Irishwoman to score a goal in hockey at the Olympics, given she bagged the pivotal sudden death stroke that sent the Green Army there in the first place.

Róisín Upton, who scored the sudden death stroke that sent Ireland to Tokyo – now becomes the first Irish woman ever to score a goal in #hockey at the Olympic Games. Some woman for one woman. #Tokyo2020 #TeamIreland ☘️ pic.twitter.com/3edfPaRhVZ

— Elaine Buckley (@ElaineBucko) July 24, 2021
Content in the lead, Ireland shook off the ferocious humidity at the Oi Hockey Stadium and played some really pleasing two-touch hockey from there.

South Africa lost their referral with an unsuccessful penalty corner appeal in the second corner, though nothing came of the resultant move. Clare woman Naomi Carroll went agonisingly close from another shortly after, as Ireland clearly cemented their status as the better side, though failed to capitalise on their dominance when it came to the scoreboard.

They created opportunities, and shut South Africa out — Lena Tice in particular was immense in defence — as play turned scrappy at times, but the score remained 1-0 at half time.

The third quarter was quit a frustrating one for Ireland, before Torrans — in her first-ever world ranking match –made it 2-0 in the dying seconds of it.

After a sustained period of pressure on the hunt for that all-important second goal, the dam finally broke, with the Dubliner in the right place at the right time to skillfully flick home and settle the nerves.

— Team Ireland (@TeamIreland) July 24, 2021
South Africa goalkeeper Phumelela Mbande kept her side in the contest with a string of exceptional saves, as several big Ireland chances went abegging, from penalty corners and elsewhere.

Their opponents were clearly living on scraps, though were boosted by a couple of incidents late on in the third quarter. Ireland went down a player temporarily when Nikki Daly was shown a green card, while they conceded a dangerous penalty corner with just over two minutes to go after a Torrans footblock.

Be part
of the team

Access exclusive podcasts, interviews and analysis with a monthly or annual membership.

But Dancer’s side held their nerve and weathered the storm, before stepping up to score their second goal and further deflate South Africa.

The intensity dropped in the final quarter, though McFerran was on hand to keep a clean sheet and ensure Ireland enjoyed a bright start, creating chances right to the death though their execution may be a concern.

Next up, Ireland face the all-conquering favourites, the Netherlands, on Monday, before meeting Germany, India and Great Britain as the pool stages heat up later in the week. 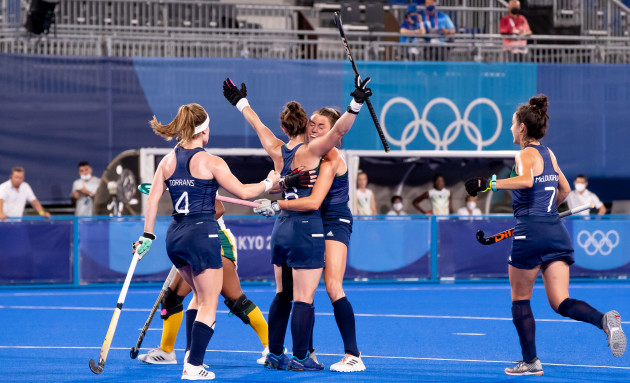