by Admin5
in COVID-19
Reading Time: 4 mins read
A A
464
SHARES
1.8k
VIEWS
Share on FacebookShare on Twitter

n eight-week gap between the first and second doses of the Pfizer BioNTech Covid-19 vaccine is a “sweet spot” when it comes to generating strong immune response while protecting the UK population against the Delta variant of coronavirus, scientists have said.

In a new study, funded by the Department of Health and Social Care (DHSC), researchers have found that when compared to a four-week gap, a 10-week interval between the doses produces higher antibody levels, as well as a higher proportion of a group of infection-fighting cells in the body known as “helper” T cells.

At the start of the second wave of the Covid-19 epidemic, the Joint Committee on Vaccination and Immunisation (JCVI) made a decision to recommend a 12-week gap between two doses for the two vaccines that were available at the time: Pfizer and Oxford AstraZeneca.

This was at a time when vaccines were short in supply and preliminary research suggested that widening the gap from the manufacturer-recommended four weeks to 12 ramped up the jabs’ immune response.

But in May, the guidance was changed to eight weeks as cases associated with the Delta variant – which was first identified in India – continued to rise in the UK.

Professor Susanna Duanchie, of the University of Oxford, who is the joint chief investigator in the Pitch study, said: “The original recommendation from JCVI was 12 weeks and this was based on a lot of knowledge from other vaccines that often having a longer interval (between doses) gives your immune system a chance to make the highest response.

I think that eight weeks is about the sweet spot for me, because people do want to get the two vaccine (doses) and there is a lot of Delta out there right now

“The decision to put it to eight weeks is really balancing all the wider issues, the pros and cons – two doses is better than one overall.

“Also, other factors need to be balanced, (such as) vaccine supply, the desire to open up, and so on.”

She added: “I think that eight weeks is about the sweet spot for me, because people do want to get the two vaccine (doses) and there is a lot of Delta out there right now.

“Unfortunately, I can’t see this virus disappearing so you want to balance that against getting the best protection that you can.”

For the Pitch study, the researchers recruited 503 healthcare workers, 44% (223) of whom previously had Covid-19, and studied the immune responses generated by the Pfizer jab.

They found that both short (three to four-week) and long (10-week) dosing intervals of the Pfizer vaccine generated strong antibody and T cell immune responses.

But the longer schedule led to higher antibody levels and a higher proportion of helper T cells, which according to the researchers, supports immune memory.

The scientists found that after the second dose, a wider gap also resulted in higher neutralising antibody levels against the Delta variant and all other variants of concern.

But in this instance, antibody levels dropped off between first and second dose – leaving the recipients vulnerable against the Delta variant after one jab.

However, Dr Rebecca Payne, one of the study authors from Newcastle University, said that the cellular response from infection-fighting T cells remained consistent across both long and short dosing schedules, “indicating they may contribute to important protection against Sars-CoV-2 during this time”.

Dr Payne said: “After the second dose on the longer dosing schedule, antibody levels surpassed those seen at the same timepoint after a shorter dosing interval.

The researchers said there may be exceptions where the dosing schedule may need to be shortened from eight weeks to four, such as for those who are about to have treatments that may affect the immune system, such as cancer or organ transplant.

Dr Lance Turtle, of the University of Liverpool, who specialises in T cell studies, said: “I would then say they should be vaccinated as soon as possible.”

Vaccines Minister Nadhim Zahawi said: “As we raced to offer a vaccine to all adults, we took the JCVI’s advice to shorten the dosing interval from 12 to eight weeks to help protect more people against the Delta variant.

“This latest study provides further evidence that this interval results in a strong immune response and supports our decision.

“I urge every adult to get both doses of the vaccine to protect yourself and those around you and we are looking to offer millions of the most vulnerable a booster jab from September to ensure this protection is maintained.” 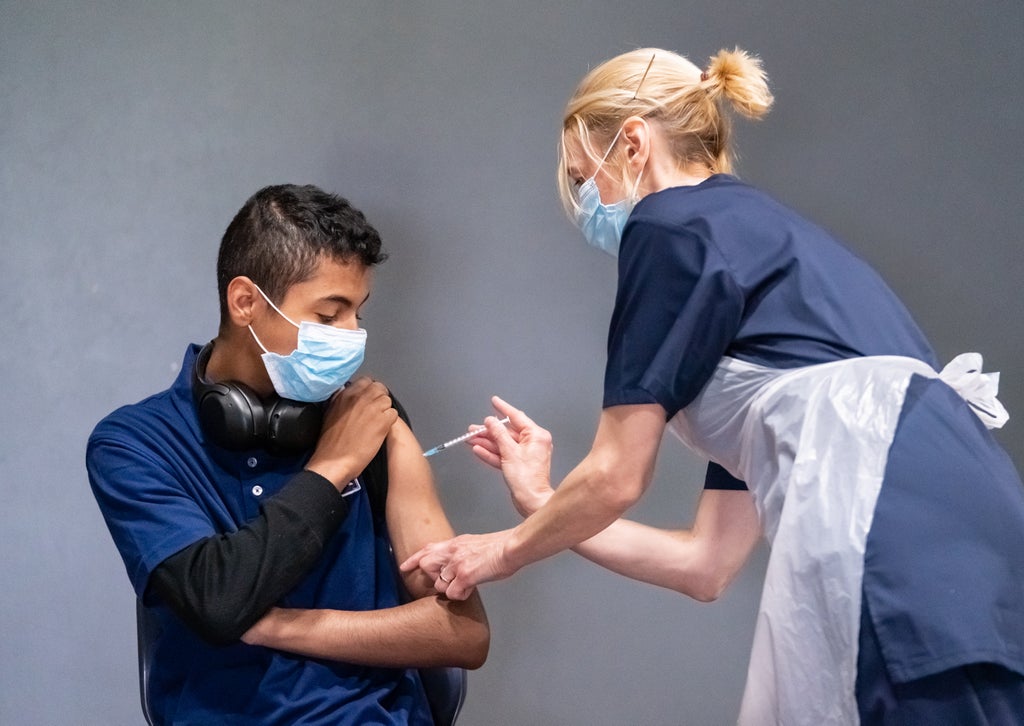